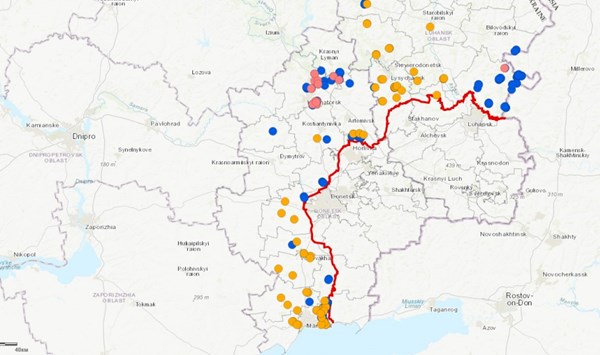 The Ukrainian Ministry of Defense has published an interactive map of the Donetsk and Luhansk regions contaminated by mines and explosive remnants of war, Ministry's pressed service reported.

“The map can be used to find out the name, area, type, and status of the mined area, the type of threat, the type of marking, the organization that examined the area and the date of the examination,” the report says.

According to the Ministry, the military and civilians have been repeatedly targeted with mines and other explosive devices since the beginning of the Russian aggression on the territory of Donetsk and Luhansk. The information map was developed to reduce the risk of accidents from unauthorized handling of explosive devices.

The non-government organization The HALO Trust assisted the Defense Ministry in making the map. The ministry noted that Ukraine is one of the war states most contaminated with mines and explosive remnants in the world.

On September 30, three children were killed by a mine explosion in Horlivka. In July, two teenagers were also blown up by a mine near Horlivka.

The demining group of the Armed Forces of Ukraine has disarmed more than seventeen thousand explosive devices in the Donbas since the beginning of the militray operation. They managed to clear about 25 hectares of farmland, 70 hectares of water area, 1,152 km of roads and 712 km of railways.
However, according to experts, Ukraine will have to spend 10 to 15 years to completely clear the territory of Luhansk and Donetsk regions of mines.