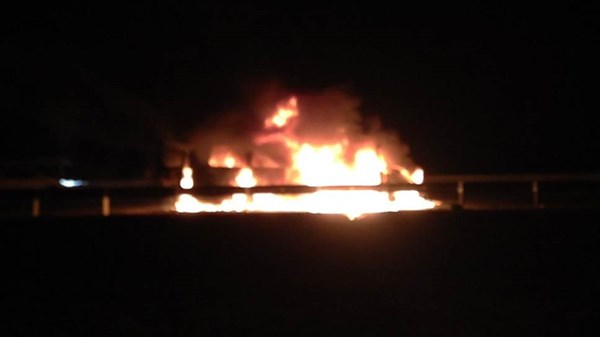 A fire broke out at one of Russia's largest defense plants, the Krasnoyarsk Machine-Building Plant Krasmash.

As reported by TASS with reference to the spokesman for the regional branch of the Russian Emergencies Ministry, a fire has broken out on the roof of one of the workshops of the plant, which produces Sarmat and Sineva intercontinental missiles, as well as booster blocks for Zenit and Proton launch vehicles.

The exact location of the fire was not specified, but it was assigned the fourth level of complexity out of the possible five.

The roof of the workshop has completely collapsed. All the people were successfully evacuated without any casualties.

According to the Emergencies Ministry, 9 units of technical equipment and 38 personnel were involved in extinguishing the fire.

The source in Krasnoyarsk emergency services told Interfax that the fire covered 5 thousand square meters. According to him, the refrigeration plant is in the center of the fire. The buildings and structures of the Krasmash plant do not provide the threat of spreading fire in the territory, said the Roscosmos State Corporation for Space Activities representative.

At the same time, the Roscosmos version differs from the one proposed by the Emergencies Ministry. The head of the press service of the state corporation told RIA Novosti that it was not the missile plant’s workshop that was burning, but the Biryusa refrigerators warehouse, which is located there.

“The employees of the Krasmash plant together with the Emergencies Ministry took measures to secure the premises directly related to the plant,” the head of the Roscosmos press service, Vladimir Ustimenko, told RIA Novosti.