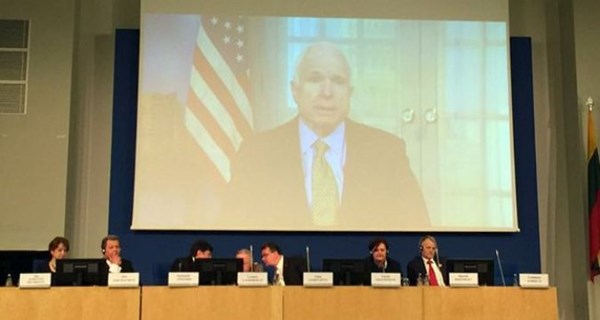 US Senator John McCain said the United States will continue to support the territorial integrity of Ukraine and Crimea as part of it. He said this in a video which was broadcasted in the Seimas of Lithuania on the occasion of the World Congress of the Crimean Tatars.

This was reported by the press service of the Presidential Commissioner on the Crimean Tatar Affairs, Mustafa Dzhemilev, on April 11th.

"We know what we can achieve if we refuse to support the will of the despots," John McCain said.

He also recalled the actions against the Crimean Tatars in Crimea after the Russian annexation of the peninsula.

"Crimea is an ancestral land of the Tatars, and they have the right to live in their homeland, the world can not stand aside… using just words, we will not achieve anything. We need cohesion. I will never stop fighting for a free and independent Ukraine with Crimea as a part of it. I will always support you in this struggle, and God bless you," he said.

A meeting of the Coordination Council of World Congress of the Crimean Tatars is being held in Vilnius from April 11 to 13. The first event of the congress was the international conference on the "Mass Violations of Human Rights in Occupied Crimea".