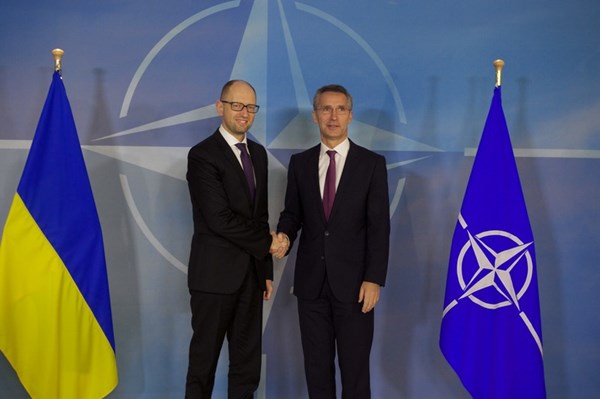 On September 22 NATO Sectetary General Jens Stoltenberg spoke at the National Security and Defence Council of Ukraine in Kyiv.

"It is an honour to meet Ukraine´s National Security and Defence Council today. This council plays a key role in upholding the territorial integrity and sovereignty of Ukraine. I´m looking forward to our discussions today.

Ukraine and NATO have been Partners for almost 20 years. I am proud of everything we have achieved together. Ukrainian troops have worked alongside their NATO colleagues in Afghanistan and Kosovo.

Ukraine has contributed ships to our counter-piracy and counter-terrorism operations. And Ukraine participates in the NATO Response Force.

Only yesterday, President Poroshenko and I opened the ‘Ukraine 2015’ exercise to practice disaster response. Ensuring our people are protected from natural as well as man-made disasters. It is clear that NATO can rely on Ukraine.

Today, the Ukrainian people are facing their greatest challenge. There is conflict on Ukrainian soil. Russia has illegally annexed Crimea. An act we will never accept. And Russia continues to support the separatist forces in the east with weapons, command-and-control and troops. This is a violation of the territorial integrity of Ukraine, and it undermines the international rules-based order.

In these difficult times, Ukraine can rely on NATO. NATO provides Ukraine with political and practical support. We support your independence and your territorial integrity. And we support the full implementation of the Minsk agreements. This remains the only way out of the crisis. Ukraine has had to make some difficult political decisions. Particularly on the status of certain parts of eastern Ukraine.

But it shows that Kyiv is sticking to its Minsk commitments. It is important that you continue on this path. The full implementation of the Minsk agreements by all parties is a prerequisite for peace and for Ukraine to restore sovereign control of its own boarder. I commend you all that you have done.

Your efforts, the fact that the ceasefire is mainly holding, and renewed attempts to find a political solution, are encouraging.

The onus is now on Moscow and the separatists to respect their Minsk commitments. Tofully respect the ceasefire. To withdraw their heavy weapons. And to grant OSCE monitors full access. Any parallel local ‘elections’ that are not fully compliant with Ukrainian law would put the Minsk agreement at risk.

Our advisors are working with the Ministry of Defence, the General Staff, the National Guard, and others.

In addition, many NATO Allies are supplying equipment and helping with military and police training.

NATO and Ukraine have a stronger, more focused, more substantive partnership than ever before.

Together, we can preserve our vision of a Europe whole, free and at peace"