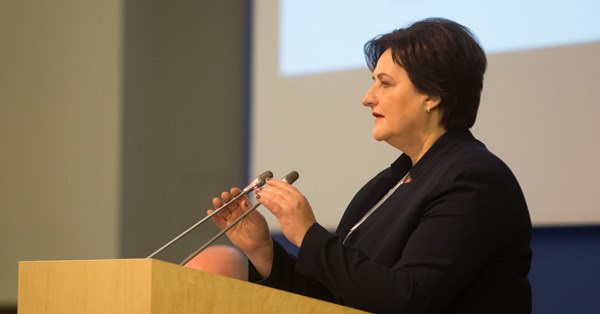 After the Russian annexation of the Crimean peninsula, "peaceful life of the Crimean Tatars in their homeland has been violated," the Speaker of the Lithuanian Seimas, Loreta Graužinienė, said during the meeting of the Coordination Council of the World Congress of Crimean Tatars, which started on April 11 in Vilnius (Lithuania), Krym.Realii reported, with reference to the press service of the Commissioner of the President of Ukraine on the Crimean Tatar Affairs, Mustafa Dzhemilev.

According to the report, Loreta Graužinienė congratulated the participants of the international conference "Mass Violations of Human Rights in Occupied Crimea" and the meeting of the Coordination Council of the World Congress of the Crimean Tatars.

"The peaceful life of the Crimean Tatars in their homeland was violated by the occupation and annexation of Crimea by the Russian Federation. We are sorry that after the occupation, human rights are being violated and the persecution takes place in the Autonomous Republic of Crimea," she said.

Loreta Graužinienė expressed hope that the conference, which takes place in the Seimas of Lithuania, "will increase the awareness of people about the lawlessness that is happening in Crimea."

A meeting of the Coordination Council of the World Congress of the Crimean Tatars is being held in Vilnius from April 11 to 13. The event began with the international conference "Mass Violations of Human Rights in Occupied Crimea".

In February of 2016, the European Parliament adopted a resolution that condemned the "unprecedented level" of violations of the rights of Crimeans, in particular, the Crimean Tatars, in the annexed peninsula. A meeting of the delegation of the World Congress of Crimean Tatars with the leaders of Lithuania is planned. It is expected that the meeting of the Coordination Council will be attended by about 70 representatives of different organizations from Crimea, Turkey, Romania, Poland, Canada and the US.

After the annexation of Crimea, daily searches, detentions and all sorts of restrictions began on the peninsula.

Russian authorities are denying the reports on violations of human rights in the Crimea.