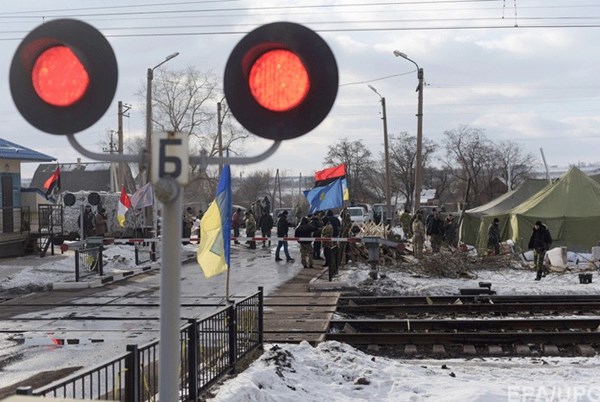 The National Security and Defense Council (NSDC) of Ukraine decided on March 15 to temporarily end freight movement along railway lines and roads across the line of contact with the uncontrolled Donbas territories. In this way they have effectively legalized the trade blockade of several areas in the Donetsk and Luhansk regions which has been performed by war veterans in Eastern Ukraine.

“Taking into account the capture of Ukrainian companies and the escalation of the security situation in the ATO zone [the war in Eastern Ukraine], the NSDC has decided to end freight movement across the line of contact,” announced NSDC secretary Oleksandr Turchynov. He said that all motorways and railway lines leading towards the demarcation line must be blocked by 13:00 on Wednesday March 15. Towards evening, state border services spokesperson Oleg Slobodyan confirmed that the NSDC’s instruction had been carried out, and that from the specified time all freight transport to and from the uncontrolled Donbas territories had been stopped. At the same time, he noted that the NSDC’s decision does not affect ordinary citizens. According to Slobodyan, peaceful inhabitants can move freely across the demarcation line and bring personal items with them. Yuriy Grymchak, adviser to the Minister of Temporarily Occupied Territories and Internally Displaced Persons, told the media outlet “Obozrevatel” about this in detail. He asserted that movement of personal motor vehicles would continue, but the resolution of the Cabinet of Ministers regarding movement would remain in effect.

Ukrainian President Petro Poroshenko emphasized that the humanitarian cargo (of Ukrainian and international organizations) would cross the demarcation line, and that the SNDC’s decision does not extend to them.

“We must not allow the humanitarian situation to deteriorate in the occupied territories,” he said.

The Donbas trade blockade Headquarters supported the authorities’ decision. However, they did express regret that the “government institutions only started to make the decision on the 59th day of the blockade”.

Russia has already reacted to the Ukrainian NSDC’s decision. In particular, Boris Gryzlov, Russia’s authorized representative in the Trilateral Contact Group, said that it [the decision] violates the Minsk agreements.

“Instead of establishing a financial system in the Donbas, in accordance with the Minsk agreements, the Ukrainian authorities are destroying their own bank system,” Gryzlov believes. Separatists have called the NSDC’s decision, “bordering on genocide”.

Germany did not support a complete transport blockade with the Donbas either. Steffen Siebert, head of the German governmental press- and information-agency, said that this “complicates the already otherwise complicated situation” in Eastern Ukraine. He added that the peace arrangements are being carried out by neither Moscow nor Kyiv.

In an interview on Ukrainian TV, Ukrainian President Petro Poroshenko mentioned the circumstances under which the country would stop blockading freight to and from the Donbas.

“We say: return the companies to the Ukrainian owners, regardless of whether this form of ownership is state or not [on March 1, in response to the trade blockade of the Donbas by war veterans, the separatist republics “nationalized” about 40 Ukrainian companies in the territory of the Donetsk and Luhansk regions]… Guarantee the first and second points of the Minsk agreements – the ceasefire and the withdrawal of heavy equipment and artillery, and we will withdraw the restrictive measures on the movement of freight,” Poroshenko said. He drew attention to the fact that separatists had seized Ukrainian companies several days ago, and announced the compulsory change of owners on March 15. The president announced that the estimated value of the assets confiscated by the separatists amounts to $2 billion.

In return, Alexander Zakharchenko, leader of the so-called Donetsk People’s Republic, said that he does not intend to return control of the companies to the legitimate owners according to Ukrainian jurisdiction.