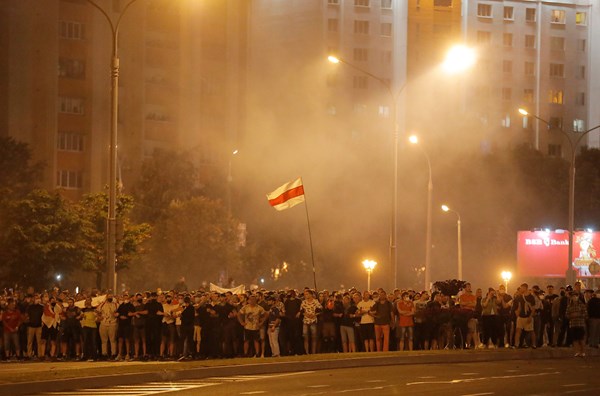 Thousands of people took to the streets of Minsk, Gomel, Vitebsk and at least ten other Belarusian cities after the authorities released the official exit poll, according to which Alexander Lukashenko won the presidential elections for the sixth time in a row.

The protesters tried to break the police cordon in the square near the monument "Minsk - the hero city". The riot police in full gear holding shields began to throw stun grenades and pepper gas canisters at people. Ambulances arrived at the square and at least one person suffered a head injury.

The bus drove into a crowd of protesters on Masherov Avenue in the center of Minsk, after one of the protesters' cars blocked the way to a police car.

Units of internal ministry troops are converging on the center of Minsk, TASS reports. According to the Belsat correspondent, numerous people are beaten and wounded.

Security forces use water cannons to disperse protesters in Minsk, and traffic is blocked in the city center, Novaya Gazeta reports.

According to the tut.by, the police are detaining those gathered at polling stations in Minsk. Detentions are also reported in the cities of Gomel, Mogilev, Brest and Vitebsk.

According to Conflict News, more than 20 checkpoints have been set up at the entrance to the city. Security forces block streets and squares. In all major cities of Belarus, the Internet is only partially working in the morning. The number of connections has more than doubled, according to NetBlock.

According to the exit poll conducted at the request of the Belarusian state television, 60-year-old Lukashenko won the election with 82% of the votes, and his main rival, Svetlana Tikhanovskaya received about 7%.

The head of the Central Election Commission of Belarus, Lydia Yermoshina, said that Lukashenko was winning in all areas of Belarus.

The Belarusian authorities did not allow opposition representatives to the electoral commissions and did not allow almost any of the independent observers to the polling stations. More than 1.3 thousand people were detained for participating in the protests. Lukashenko's strongest rival ex-banker Viktor Babariko was arrested on charges of economic crimes.

"Lukasheno has made it clear that he intends to hold on to power at all costs," political analyst Alexander Klaskovsky told Reuters. "The question remains what the price will be."