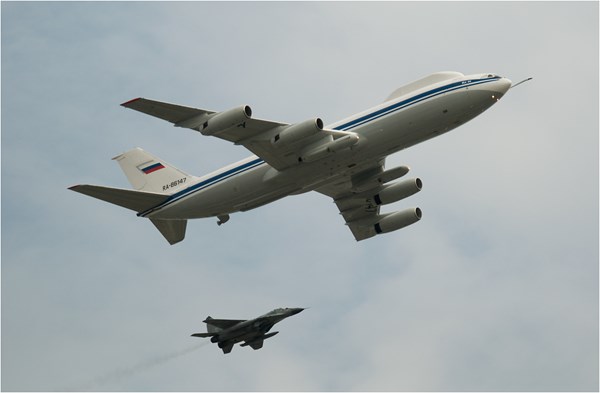 On Monday afternoon, Russian TV channel REN TV reported that important components were stolen during a planned repair of  Il-80 aicraft, which experts have nicknamed the "Doomsday Plane".

According to the TV channel, on Friday the head of the security service of the Taganrog Aviation Scientific Technical Complex spoke to the police. He allegedly reported that during the inspection of IL-80, the plant officials noticed that the hatch to the cargo compartment was opened. 39 radio station blocks and five circuit boards from dismantled blocks disappeared from the plane.

"All the on-board instruments were in place when the aircraft was received. After the completion of the work, the main entrance, the hatch of the cargo compartment, three spare exits were sealed," the source told REN TV.

Police were able to find the fingerprints of the alleged thieves, as well as traces of their shoes.

Interfax news agency also reported, citing its source, about theft of electronic equipment from one of the most secret military aircraft in Russia.

A TASS source reported that the plant in Taganrog was replacing the grease on the chassis shock racks. The plane has been undergoing maintenance since the beginning of 2019, Interfax's interlocutor said.

"The unidentified persons opened the cargo hatch of the Il-80 aircraft," he said. "Thirty-nine radio stations have disappeared from the plane's compartments."

The theft of equipment from the air command center of the Russian Armed Forces Il-80 can lead to the leak of classified and top-secret information, believes  the military observer of the Gazeta. Ru Mikhail Khodarenok.

"Hypothetically, it may be possible to find technical details how the commands are transmitted to the armed forces in case of potential conflict," the expert said.

On Monday evening, the press service of the Russian Internal Ministry Transport Department for the North Caucasus Federal District confirmed that the police had received a report on this matter.

"A representative of Beriev Taganrog Aviation Scientific Technical Complex contacted the Taganrog Police with a report that an open cargo hatch was found during the inspection of one of the planes. At present, this fact is being checked," the police press service said.

A possibility of opening a criminal case is being considered, the source of Interfax said. The Interior Ministry did not comment on this issue.

The Il-80 (Il-86SPU, NATO reporting name: Maxdome) is a command and control aircraft developed in the late 1980s by Ilyushin's Design Bureau.

Interfax calls it one of the most classified aircraft of the Russian Defense Ministry. The first IL-80 flight took place in May 1985.

These planes have been dubbed "Doomsday plane" in the United States. They are supposed to be used in the event of a nuclear war if the ground control structures are destroyed.

The most known models of such aircraft are the American E-4B based on the Boeing 747 and the Russian Il-80, developed on the basis of passenger Il-86 plane.

In May 2019, Russian Deputy Defense Minister Aleksey Krivoruchko said that Russia had completed development work on the modernization of command-and-control aircraft based on Il-80 and Il-82 aircraft and began work on the refurbishment of existing aircraft.

In October of this year, TASS, citing its source in the aircraft industry, reported that Il-96-400M planes will be used for command-and-control operations in place of Il-80 aircraft.

According to open sources, four command-and-control Il-80s are in service in Russia.