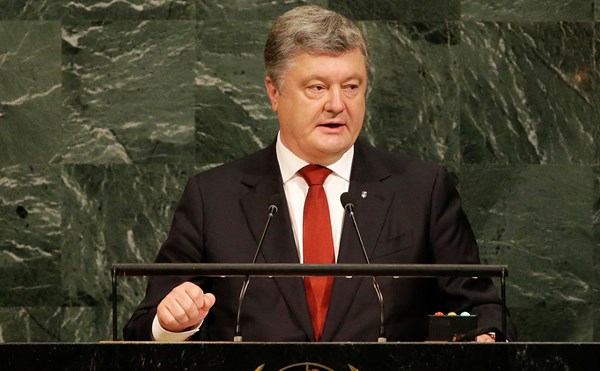 Ukraine needs the assistance of UN peacekeepers due to the armed aggression unleashed by Russia against Ukraine in 2014, said Ukrainian President Petro Poroshenko.

“Our [Ukrainian] blue helmets have taken part in UN operations around the world. In many cases, they were the major player who made it possible to achieve peace – both in the Balkans and in Africa… Today the time has come for us to lean on the UN’s peacekeeping shoulder,” Petroshenko said at a UN Security Council session in New York on Wednesday.

He mentioned that Ukraine’s involvement in UN peacekeeping activity did not stop even during the peak of Russian armed attacks on the country.

“As you are well aware, in 2014 Russia launched armed aggression against Ukraine, and occupied part of our territory. The Russian leitmotif that ‘we aren’t there’ does not withstand any criticism,” Poroshenko emphasized, noting that there are irrefutable facts proving that Russia creates, leads and sponsors the terrorists who are operating in the Donbas.

Poroshenko called on the UN Security Council to deploy peacekeepers in the Donbas as soon as possible.

“I want to reiterate my request to the council – to deploy peacekeepers in the Donbas – the faster, the better,” the Ukrainian President said.

He mentioned that as early as the spring of 2015, he officially asked the chairman of the Security Council to initiate the relevant procedures for deploying a UN peacekeeping operation in Ukraine. According to Poroshenko, this matter has become even more pressing.

“The situation in the Donbas is not improving. Despite multiple ceasefire initiatives, normal people continue to suffer,” Poroshenko emphasized.

The President noted that a UN peacekeeping mission should facilitate the restoration of Ukraine’s sovereignty, not freeze the conflict.

“The deployment of a peacekeeping operation will make it possible to restore justice, and not just to cement the occupation. I believe that justice will be the restoration of Ukraine’s sovereignty over its territory. Justice will be for Ukraine to maintain control over its freedom,” Poroshenko stated.