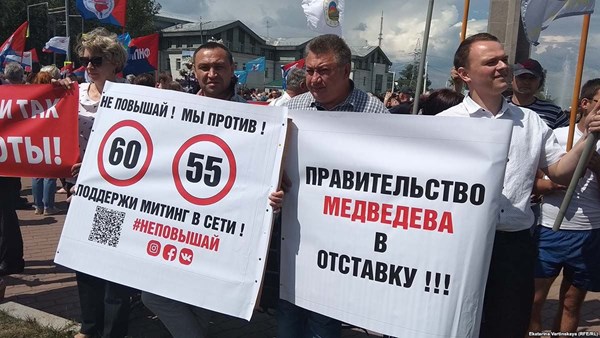 The Russian Communist Party, Yabloko party, Democratic Choice and other political groups organized new protests against the pension reform. These protests were held on Sunday, September 2, in many Russian cities.

"According to the organizers, 2000 people took part in the rally in Vladivostok, up to 2500 in Novosibirsk and 500 in Yekaterinburg. Mass protests also took place in Barnaul, Bryansk, Lipetsk, Omsk, Rostov-on-Don, Samara," - said the report.

In Moscow, the Moscow’s branch of the Communist Party held the protest against the increase in retirement age in the Academician Sakharov Avenue. The authorities approved the request of the organizers for 15000 participants to take part in this action.

The Russian authorities intend to increase the age of retirement to 65 years for men and up to 60 years for women. According to the Levada Center research center, 89% of Russians are against this initiative.
Major protests against the controversial reform already took place in July.

The discontent of the Russian population forced Russian President Vladimir Putin to make a televised speech addressed to the nation. In this speech, he announced the softening of the initial plans to raise the retirement age. Also, plans to provide certain guarantees and benefits to some groups of the population.

Oppositionist Alexei Navalny planned to hold his rally against the pension reform on September 9, on the Russian elections day. However, on August 27 the court sentenced the politician to 30 days of arrest because of his participation in the "voters' strike" in January. Despite this, he urged his supporters to participate in the protest.