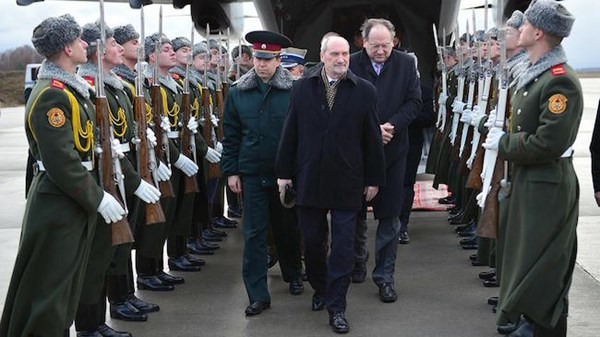 The Minister of National Defence of Poland, Antoni Macierewicz, emphasized the strategic nature of the cooperation between his country and Ukraine and the need for further development of bilateral cooperation between the two countries in the defence sector. Following the results of the meeting with the Ukrainian Minister of Defence, Stepan Poltorak, Macierewicz told journalists, “Ukraine is a strategic partner of Poland and our absolute priority. That is why I paid my first visit as a Minister of Defence to Kiev. A safe Ukraine means a safe Poland and Europe.”

Macierewicz noted that all joint endeavours which were discussed during negotiations were included into the Declaration, which the Ministers of Defence of two countries have just signed.

“This is a very important event for us, as well as Ukraine,” Macierewicz emphasized. The Minister of National Defence of Poland reported that during today’s meeting, the decision was made to further the development of bilateral cooperation between Ukraine and Poland in the defence sector.

“I want to declare our readiness to begin the joint exercises that are underway with the Polish-Canadian-American coalition in Yavoriv. We are working intensely to further develop cooperation in the military-industrial sector,” Macierewicz reported.

Poltorak noted that at the beginning of Russian aggression against Ukraine, Poland was one of the first countries that came to help Ukraine.

“We received both political and full logistical support. Our fighters, who were wounded at the front line, were treated in Poland,” the Ukrainian Minister of Defence reminded.

Stepan Poltorak reported that working groups will be created to discuss all proposals raised during today’s negotiations.

At the end of the press conference, Poltorak thanked the leadership and people of Poland for their support and help to Ukraine.