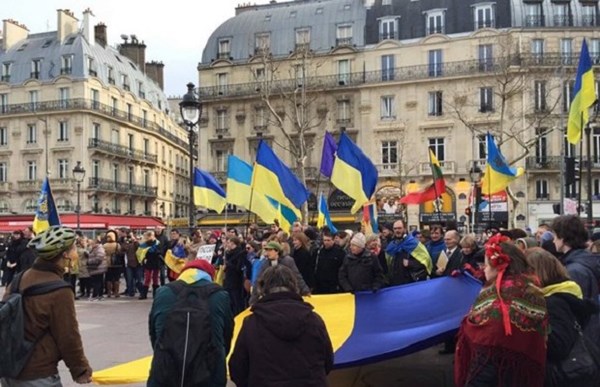 About 3 thousand people passed on Sunday through the streets of Kyiv with the slogans calling for the impeachment of President Petro Poroshenko. The march was organized by his political opponent, former president of Georgia Mikheil Saakashvili, who has been stripped off Ukrainian citizenship by the Ukrainian President.

The participants of the march, led by Saakashvili, set off from the monument of Taras Shevchenko and went through the government district, chanting "Impeachment!", "Down with the gang!" And "Kyiv, get up!".

People carried flags of Ukraine and Georgia, red and black UPA flags and banners with slogans against Poroshenko. The column was accompanied by reinforced National Police units.

Speaking to the crowed, Saakashvili called for increasing pressure on the parliament to adopt the law on the impeachment. He also demanded the creation of an anti-corruption court.

"This week MPs can accept these laws, but I do not believe it. We are now establishing impeachment committee and I propose that next Sunday we should gather again in Maidan (Maidan Nezalezhnosti – central square in Kyiv), " he said.

Saakashvili lost citizenship of Ukraine in July this year, when he was abroad. In September he managed to enter Ukraine with the help of his supporters. They broke through the border crossing from Poland .

Since then, representatives of the ruling coalition in Kyiv have threatened to expel him from Ukraine. Georgia also applied for the extradition of its former president. Ukrainian media speculate that Saakashvili may be expelled to Poland because he entered Ukraine from Poland in September. Saakashvili is currently fighting to regain Ukrainian citizenship.

Saakashvili served as the president of Georgia in 2013 and to avoid lawsuits for abuse of power he left for the USA and then for Ukraine. In May 2015, he received a Ukrainian passport, and Poroshenko appointed him governor of the Odessa Oblast.

Their relationship broke down when Saakashvili resigned and accused the president of supporting corrupt clans. Saakashvili then set up his own party in Ukraine called the Movement of New Forces, and now he is demanding, among other things, early parliamentary elections and the resignation of Poroshenko.