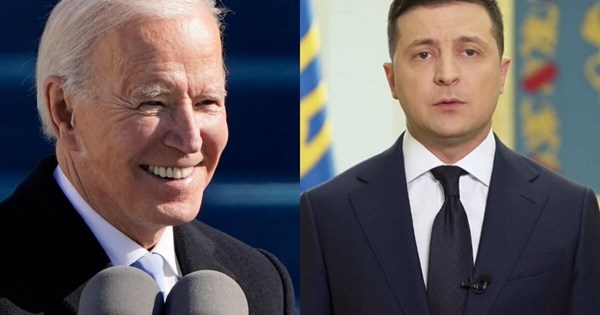 The Presidents of the United States and Ukraine held a telephone conversation on January 2. As noted in the press release of the White House, Joe Biden assured Volodymyr Zelensky that "the United States, its allies and partners will respond decisively if Russia further invades Ukraine."

White House Press Secretary Jen Psaki stressed that during the telephone conversation, the US President reaffirmed the commitment of the United States, its allies and partners to the principle of "nothing about you without you." Kyiv's should be included in any negotiation process in which issues and topics related to Ukraine will be discussed.

"He reaffirmed the United States’ commitment to Ukraine’s sovereignty and territorial integrity. He also expressed support for confidence-building measures to de-escalate tensions in Donbas and active diplomacy to advance the implementation of the Minsk Agreements, in support of the Normandy Format," the White House press release reads.

"The first international conversation of the year (with Biden) proves the special nature of our relationship. The Presidents discussed common actions (of Ukraine and the United States) and partners to preserve peace in Europe and prevent further escalation, reform and de-oligarchization (in Ukraine). We appreciate the unyielding support (of Ukraine)," the Ukrainian President said, commenting on the conversation.

The radio station Echo of Moscow notes that in the event of an escalation of tension along the Ukrainian borders, the United States and the West can impose large-scale sanctions against Russia that could affect the economic, financial and military spheres.

On December 30, 2021, the presidents of the United States and Russia held a telephone conversation. The conversation took place at the initiative of Moscow and lasted 50 minutes.

The U.S. President, according to the White House’s statement, called on Putin to make efforts to de-escalate tensions on the border of Russia and Ukraine. Joseph Biden also warned Vladimir Putin that the United States and allies will respond decisively in the event of Russia's aggression against Ukraine.

Assistant to the Russian President Yuri Ushakov said that Vladimir Putin warned Joe Biden about the serious consequences if the U.S. imposes new sanctions on Russia, calling it a colossal mistake of the United States.