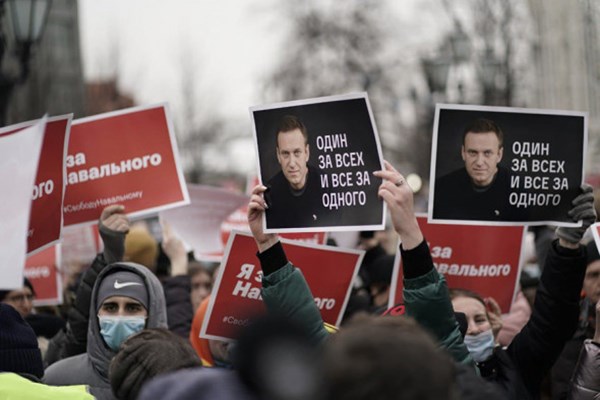 France considers the "shift towards authoritarianism" in Russia,which is demonstrated by the arrest of opposition leader Alexei Navalny and mass detentions at rallies on January 23,  "very disturbing",  said the Minister of Europe and Foreign Affairs Affairs Jean-Yves Le Drian in an interview with the French radio station France Inter, which was aired on Sunday, January 24.

"I believe that these mass arrests showed an extraordinary violation of the rule of law," Le Drian said. "I also find that the scale of the demonstrations in Russia is impressive," the French Foreign Minister added.

The minister also stressed that the situation around the Navalny "did not just happen yesterday."

According to the Russian web site OVD-Info, as of 16:40 pm on January 24, the number of detained during the protests in support of Alexei Navalny reached 3,618 people. This is a record number for all the protests ever held in Russia’s modern history. The protests and rallies were held in more than 120 cities of the Russian Federation and more than 70 - abroad. According to Reuters, up to 40,000 protesters gathered for the rally in Moscow alone. Moscow’s Interior Ministry's General Directorate said that as of mid-afternoon on January 23, there were about 4,000 people in Puskin Square. Russian presidential spokesman Dmitry Peskov, commenting on the January 24 rallies, said that "very few people took part in them."

A number of Russian journalists, bloggers and cultural figures recorded a video message calling for the immediate release of Navalny.