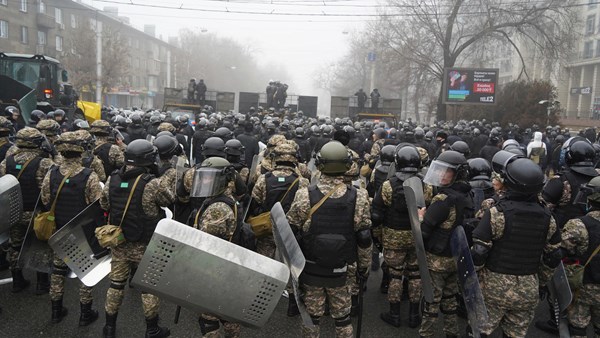 Kazakhstan authorities are shutting down the internet across the country amid mass protests that began On January 2 in the city of Zhanaozen, and the next three days spread to all major cities, including Almaty and the capital Nur-Sutlan.

On Wednesday, January 5, the Central Asian republic had almost no internet follows from the data of the NetBlock service, which tracks network outages around the world.

Partial internet shutdowns began on Monday. Representatives of the cellular providers Beeline and Kcell said that they were not to blame for the interruptions of service. "Now the competent authorities of the Republic of Kazakhstan are taking measures to suspend the work of networks and provide communication services to ensure public safety," a representative of Kcell commented on the shutdown.

On Wednesday, the state operator Kazakhtelecom turned off the Internet throughout the country. Internet access is not available for both mobile and wired operators. In Almaty and Nursultan, even telephone communication stopped working. It happened simultaneously around 17:00 local time (14:00 Moscow time), Interfax reports.

Armed with batons and metal rods, protesters entered the Almaty administration building, the Moscow Times reported, and then moved to the television center demanding to go on the air.

According to Sputnik Kazakhstan, the premises of the editorial offices of TV channels in Almaty were destroyed. According to RIA Novosti correspondent, the protesters took away firearms, shields and batons from the police, and law enforcement officers can no longer be seen in the city. People with sticks and shields stop the servicemen who fought off the units on the street. RBC news agency reports that some security forces started joining the protesters.

In Aktobe, protesters set fires near the regional administration and refused to leave the square. In Alma-Ata, people began smashing and looting gun stores. "Everything is being taken out and they are trying to open the weapons depots. We can't get through to the police," employees of one of them wrote on Instagram.

During the night, more than 120 vehicles were burned, more than 500 civilians were injured, 120 shops and kiosks and 180 restaurants were destroyed in Almaty, the commandant of the city Kanat Tatsmerdenov said.

Moscow hopes "for a speedy normalization of the situation in the country, which is linked with Russia by relations of strategic partnership and alliance, fraternal, human contacts," the Russian Foreign Ministry said.

Nazarbayev, 81, ruled the country for nearly 30 years before abruptly resigning in 2019 and backing Tokayev as his successor. Nazarbayev retains broad powers as chairman of the Security Council. He has not convened a council or commented on the violence since the start of protests in Kazakhstan this week.

“Kazakhstan is not Belarus, where the regime will kill and torture to stay in power, and not Kyrgyzstan, where power collapses in an instant. It is not like Ukraine, where civil society is strong,” notes Erica Marat, an expert on Central Asia and the post-Soviet space from the College of International Security Affairs of the National Defense University in Washington DC.

"Kazakhstan is going through its own transformation right now, a painful break with the Soviet legacy and transformation into a new country," Marat said.