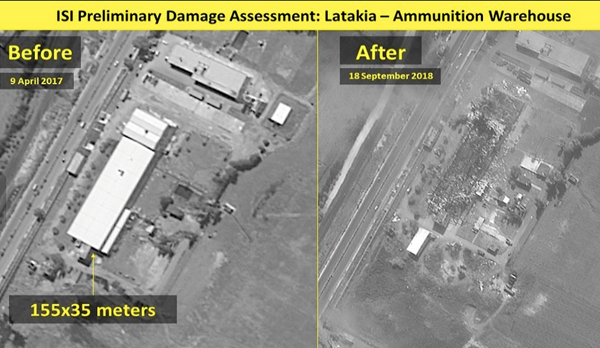 A munitions warehouse in Latakia, Syria, was completely destroyed in an Israeli missile strike, ImageSat International announced in a tweet including several satellite images.

One of the attached satellite images shows a 155x35 meter warehouse on the outskirts of the city in a photo dated 9 April 2017, compared to a photo of the same area dated 18 September 2018, in which the warehouse has been obliterated. The post did not cite any specific evidence that this was the warehouse targeted in the strike on September 17.

The Syrian Arab News Agency reported earlier that Syria had supposedly successfully repelled the Israeli attack, which it claims targeted an industrial facility.

During the attack, Syrian anti-air defense systems shot down a Russian Il-20 surveillance aircraft. The plane was supposedly searching for a place where Syrian rebels were stockpiling drones. It crashed while returning to the Russian Khmeimim Airbase, killing all 15 crew members.

Moscow initially blamed Israel for putting the Russian plane in the line of fire. Four Israeli F-16 fighters entered the Mediterranean to strike the Syrian city of Latakia, thereby “deliberately creating a dangerous situation” for ships and planes in the region, the Russian Defense Ministry complained.

Israel responded that the incident was due to indiscriminate firing by the Syrian anti-air defense systems.