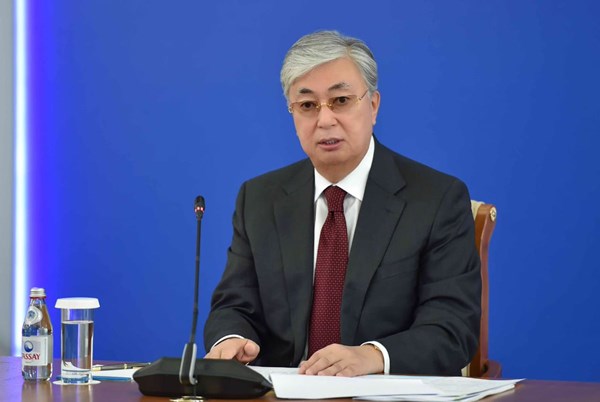 Kazakhstan has appealed for help to the member countries of the Collective Security Treaty Organization, President Kassym-Jomart Tokayev said in a televised address on Wednesday evening.

According to him, the protesters who seized city administrations, police stations and other law enforcement facilities are "terrorist gangs" that have been "trained abroad."

The mass unrest that began on January 2 and four days later developed into a nationwide uprising, according to Tokayev, "can and should be considered as an act of aggression."

"Terrorist gangs are seizing large infrastructure facilities," and are currently "fighting with military cadets," and near Almaty  "with the airborne unit of the Ministry of Defense of Kazakhstan," Tokayev said.

"In this regard, relying on the Collective Security Treaty, today I appealed to the heads of the CSTO states to assist Kazakhstan in overcoming this terrorist threat," he added.

To help the Kazakh army and law enforcement agencies, which began to join the protesters, security forces from Russia and Belarus will be deployed to Kazakhstan. Tokayev held talks with Vladimir Putin and Alexander Lukashenko two hours before his speech. In addition to the Russian Federation, Belarus and Kazakhstan, Armenia, Kyrgyzstan, Tajikistan and Uzbekistan are also members of the CSTO.

Russia "has to respond" to the request for help, Leonid Kalashnikov, head of the Russian State Duma Committee on CIS Affairs, told Interfax.

"This is what CSTO was created for," Kalashnikov said. "Moreover, he (Tokayev) said that terrorist gangs take control of infrastructure facilities, and naturally, then there will be the introduction of certain forces."

The decision was made following Tokayev's request to deploy these forces "for a limited period of time in order to stabilize and normalize the situation" in Kazakhstan, Pashinyan said.

According to the sources of the Telegram channel Baza, the Russian air regiment at the military airfield near Orenburg was put on alert for deployment to Kazakhstan, and in addition, the 11th Separate Guards Engineering Brigade, which is now in the city of Kamensk-Shakhtinsky, can be transferred to the country.

According to Kalashnikov, the CSTO forces in Kazakhstan will be used mainly to ensure the security of facilities and infrastructure.

Earlier, Tokayev introduced a state of emergency throughout Kazakhstan. Restrictions have been placed on freedom of movement, including transport. Citizens are prohibited from organizing and holding meetings and mass events, including family gatherings, related to birth, marriage or death. There is also a curfew from 23:00 to 07:00.