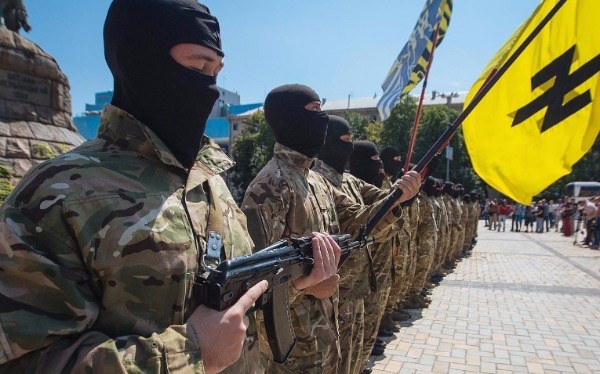 Deputy Head of Ukrainian National Police Vadym Troyan said that after the meeting with Ukrainian President Volodymyr Zelensky and conversation with the police, the fighters of Azov volunteer battalion in the Zolote of the Luhansk region of Ukraine withdrew the legal weapon. He also said that at the moments there is only a group of volunteers without weapons who stayed in the area of preparation for the withdrawal of troops in the Zone of Operation of the United Forces in the Zolote-4 and Katerinivka.

On October 26, Volodymyr Zelensky arrived in Zolote and talked with residents and the military to "find out the opinion on the issue of troops withdrawal." Since October 7, the process of withdrawing forces from the demarcation line in these settlements was delayed. At one of the meetings, the Ukrainian President got into a verbal conflict with a volunteer battalion fighter regarding possible communication with the participants of the "No Surrender" march. Activists oppose the settlement of the military conflict under the so-called Steinmeier Formula and the withdrawal of Ukrainian troops.

Representatives of Ukraine, Russia, the Organization for Security and Co-operation in Europe (OSCE), and the self-proclaimed "republics" of the Donbas signed the document at a meeting of the Trilateral Contact Group on the settlement of the conflict in Eastern Ukraine on October 1. The Trilateral Contact Group agreed on the withdrawal of forces and equipment on the Zolote and Petrovske region on October 7. However, the settlements were shelled on the same day.