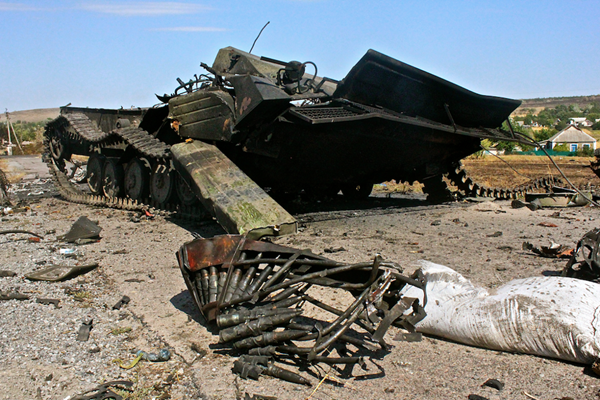 The Prosecutor General’s Office of Ukraine (GPU) has informed the Office of the Prosecutor at the International Criminal Court (ICC) in the Hague about the summary execution of nine Ukrainian soldiers who were captured by Russian occupation forces during the battles of Ilovaisk and Debaltseve.

“The notice essentially consists of the facts of the extrajudicial executions of nine soldiers from the Armed Forces of Ukraine by members of the pro-Russian organized group Cossack Union Don Army Region during the battles for Ilovaisk in 2014 and Debaltseve in 2015. The notice will be considered by the Office of the Prosecutor of the ICC alongside other episodes of serious violations of international humanitarian law committed by pro-Russian forces in Eastern Ukraine in the period between 2014 and 2019,” says the report released by the GPU’s press service on Thursday, December 5.

Ukraine provided the ICC with photographic and video evidence which proves that the Ukrainian soldiers who were later killed were captured by the occupation forces, including eyewitness testimonies about the summary executions and documents confirming the soldiers’ deaths while in prison.

The notice also exposes Russia’s tactic of waging war through proxies, with Russian command orchestrating the actions of illegal armed groups. The Office of the Prosecutor was informed that the mercenaries were used, among other things, to commit war crimes and other serious violations of international humanitarian law.

The notice was drafted on the basis of Article 15 of the Rome Statute by advocates from the Ukrainian Helsinki Human Rights Union and prosecutors from the Department for Supervising Criminal Proceedings concerning Crimes Committed under Armed Conflict Conditions.

The GPU gave its assurances that its staff would continue to collect proof of Russia waging an aggressive war against Ukraine, committing war crimes and crimes against humanity in order to ensure that the punishments could not be avoided.

Since the start of Russia’s armed aggression, Ukraine has sent the ICC five notices regarding crimes by Russians in the Donbas. In particular, the ICC has been sent proof of war crimes committed by the ringleaders of the Donetsk People’s Republic – Igor “Strelkov” Girkin, Alexander Zakharchenko, Igor Bezler and others.