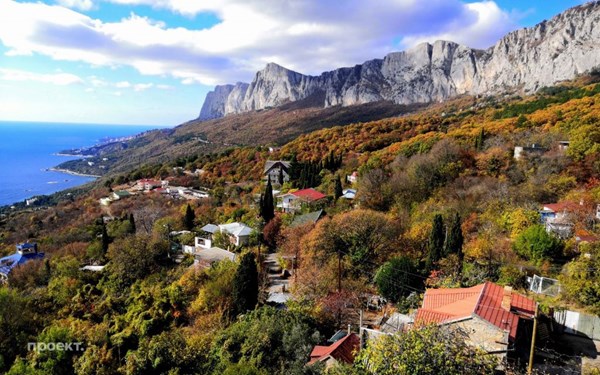 In Crimea, between the towns of Foros and Yalta, construction work is underway on state dachas (“country homes”) number 6 and 8, which are now called “Putin’s dachas”, the Russian news outlet Proekt reports.

According to the Russian journalists, over the last few years, a six-meter stone wall has been erected around the dachas, with surveillance cameras, and the area on Crimea’s southern coast where the cottages are situated is guarded by armed men.

The most unusual object in the area is a structure which the inhabitants of the neighboring village of Olyva call the “ice palace”. The fact that an ice rink is being built there is confirmed by the construction documents, which describe it as “covered hockey area No. 65” on “object K-117”.

The journalists observe that in the last three years, based on data from Russia’s state procurements portal, swimming pools, saunas and spa basins have been built in the area, as well as a dormitory for up to 60 staff members and landslide protection. Tatami mats were made in the summer.

The builders believe that the dacha will serve as a holiday home for Russian President Vladimir Putin. An employee familiar with the construction schedule said that the tatami mats were made in a hurry at the start of August 2019, when Putin visited annexed Crimea.

State dachas numbers 9 and 10 are situated close to numbers 6 and 8, and are believed to be intended for Russian Prime Minister Dmitry Medvedev, who was seen there several times in 2014, the news outlet writes.

As reported previously, Putin visited annexed Crimea in August to attend a festival. During the event, Putin rode in the sidecar of an Ural motorcycle driven by Sergey Aksyonov, head of the Crimean administration.