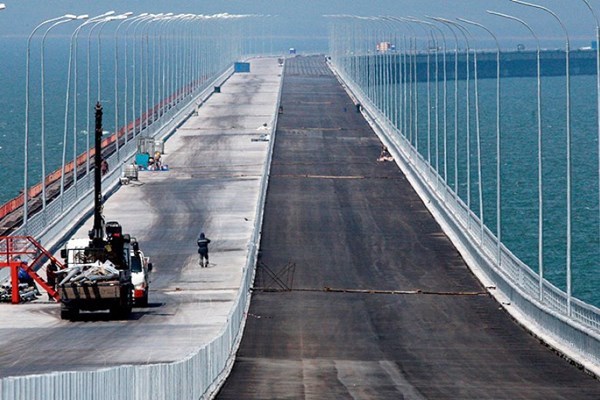 Dutch authorities will verify the legality of the participation of two Dutch companies in the construction of the bridge across the Kerch Strait, as stated by the Minister of Foreign Trade and Development Cooperation of the Netherlands, Lilianne Ploumen, reported Dutch state broadcasting organization NOS.

According to Lilianne Ploumen, even if there were no violations of the law, the Dutch government "expects that companies will conduct international business that is socially responsible." She also added that the country's leadership follows a strict policy of not recognizing the annexation of the Crimea.

According to the newspaper De Gelderlander, the Dutch company, Dematec Equipment, built one of the machines used in the construction of the bridge. Another company, Bijlard Hydrauliek, supplied the "most important part" of this equipment, the newspaper states.

The Director of Dematec Equipment, Derk van den Heuvel, said that the company is not in violation of the sanctions imposed by the European Union, as the construction took place in Russia.

The Director of another company, Marcel Beylard, told the journalists that he did not know that the units would be utilized for the bridge to the annexed Crimea, NOS reports.

The earlier scandal regarding the supply of equipment from the German company, Siemens, to the annexed Crimea led to the introduction of new sanctions by the European Union against Russia.

Russian President Vladimir Putin expressed the need to build a bridge across the Kerch Strait immediately after the annexation of the Crimea in March 2014. It was planned that the bridge would be built by 2018, and put into operation by the summer of 2019.

Ukraine withdrew from the agreement with Russia on the construction of the bridge in 2014 after the Russian annexation of the Crimea.