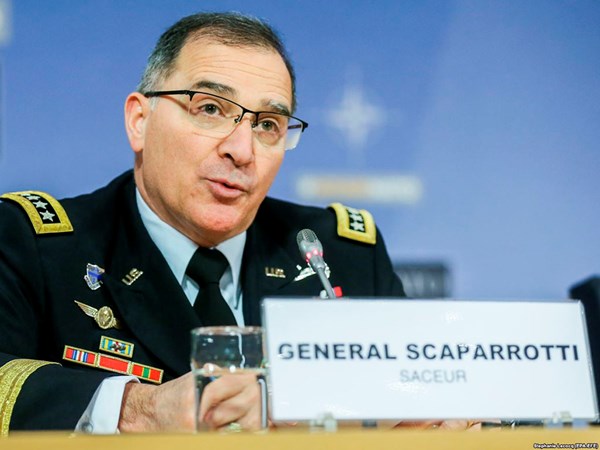 NATO's deployment of additional resources to the Baltic region despite Russia's opposition was a "necessary step" based on Moscow's "aggressive actions," the NATO supreme commander Europe, Curtis Scaparrotti says.

Speaking to Radio Liberty on the sidelines of the NATO summit in Brussels on July 12, Scaparrotti said that "four battalions is not a threat to Russia," referring to the additional forces stationed on the alliance's eastern flank and in Poland in recent months. According to him, it is “an actual deterrent to any aggression by Russia with respect to the boundaries of the NATO alliance.”

Asked if he sees Russia as a threat or a potential friend for NATO and the United States, Scaparrotti said that "we want them to be a productive member of Europe, but they have to honor and work within the international world and within the rules that have been established."

As to Russia's activities in Ukraine, the general reiterated that NATO did "not accept the occupation of the Crimea… nor their presence in eastern Ukraine today." Scaparrotti added: “Russia’s increased military presence in the Crimea—that is what I should pay attention to."

During the summit, the  member countries agreed to increase defense expenditures up to 2% of the GPD, as the US President Donald Trump stated on July 12 in Brussels.  Asked if he really threatened the countries of the North Atlantic Treaty Organization with withdrawal from NATO, Trump said that the US commitments to the Organization remain in force. He added that over several years, NATO allies will spend an additional 33 billion dollars on defense.