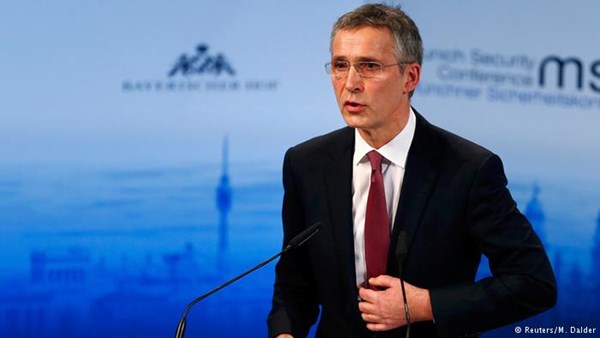 On Sunday, Georgian Prime Minister Mamuka Bakhtadze and NATO Secretary General Jens Stoltenberg discussed issues of integrating the country into the alliance and deepening cooperation in this direction, reported Georgian Public Broadcasting  Corporation. The public television of Georgia showed footage from a working dinner organized by the head of government for the Secretary General's visit to Georgia.

"The process of the country’s integration to NATO and the European Union, and the course of reforms carried out in Georgia in this direction were topics discussed during the meeting," reported the Gergian Public Broadcaster citing Stoltenberg. Bakhtadze thanked Stoltenberg for his visit to Tbilisi, noting that this trip is "confirmation of NATO’s firm support for Georgia."

NATO Secretary General arrived in Tbilisi on Sunday evening. First Deputy Minister of Defense, Lela Chikovani, stated that on March 25, Stoltenberg, Bakhtadze and Defense Minister Levan Izoria will visit the NATO-Georgia Joint Learning and Evaluation Center (JTEC) in Krtsanisi (on the outskirts of Tbilisi) to see the joint command and staff exercises NATO - Georgia Exercises 2019 that started on March 18.

On March 21, Stoltenberg stated in Brussels that NATO was ready to continue actively supporting Georgia in the process of carrying out reforms in order to prepare the country for joining the alliance. The Secretary General declined to answer the question about the possible timing of Georgia’s admission to NATO, stating that "the decision to accept a particular country is made by the members of the alliance on the basis of consensus and taking into account the full readiness of the state".

Touching upon the question of conducting joint exercises, he noted that they "are of purely defensive nature and are not directed against any other countries," including Russia.