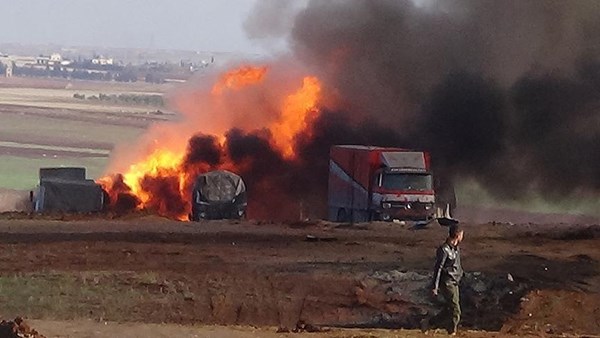 The Russian Air Force carried out airstrikes on a humanitarian convoy from Turkey, according to Anadolu.  The incident occurred in the region of the Syrian town of Azez.  The majority of the trucks were bombed and 12 people were injured.  The wounded were taken to the hospital in the town of Kilis but despite all efforts, doctors were unable to save two of them.

The Russian Air Force began carrying out airstrikes in Syria on the 30th of September.  Syrian President Bashar Al-Assad requested that Russia’s leadership provide military aid to the Syrian government. The Russian Air Force is currently deployed at the Hmeymin Airbase in the province of Latakia.

The overall number of aircraft participating in these strikes, including remote aviation, amounts to almost 70.  The maritime group consists of 10 ships, of which six are currently in the Mediterranean Sea.  On the 7th of October and the 20th November, ships of the Caspian Fleet were involved in operations.

Western countries and Saudi Arabia accused Russia of bombing not only locations of the so-called Islamic State, but also locations of moderate Syrian opposition.