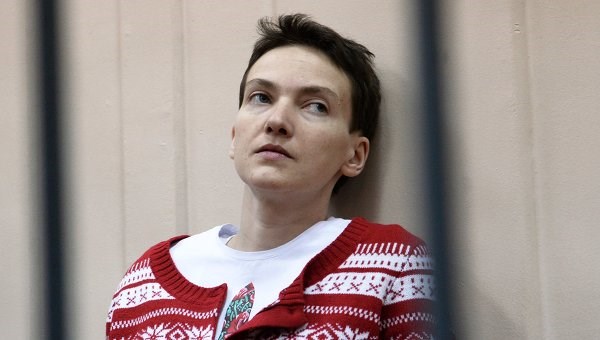 The Chairman of the Donetsk City Court, Leonid Stepanenko, refused to add witness interrogation reports to the case file during Nadiya Savchenko’s trial, the former Ukrainian pilot who is standing trial in Russia for the deaths of 2 Russian journalists in eastern Ukraine. According to the defense, these documents confirm that there was a skirmish between two military units on the day of the Russian reporters’ deaths, the incident in which Savchenko is charged.

“The firefight wasn’t directed towards civilians, as the investigation claims, but it was legal in the sense that Geneva Convention military targets were fired at. The group of armed combatants, separatists, including Kornelyuk and Voloshin, who were among them, were fired at. It’s a very important fact in order to establish the truth,” Savchenko’s lawyer, Ilya Novikov said.

Also, the judge refused to add investigation files of the Ukrainian Security Service about the abduction of the former pilot in the Ukrainian Armed Forces, Nadiya Savchenko. The court hearings in Donetsk City Court resumed after a three-week recess. The phase of provision of evidence by the defense is in progress.

On the 18th of December, Savchenko declared a hunger strike, seeking release from detention. She made her statement after the prosecutor’s application to extend a period of pre-trial detention in custody for another three months – until the 16th of April 2016. Despite her demarche, the panel of judges granted the prosecutor’s request.

Savchenko has declared hunger strikes two other times since she was arrested. The first lasted 82 days, from the 13th of December 2014 to the 5th of March 2015. The second hunger strike took place from April to May. Savchenko stopped the strike both times, failing to achieve any results.

Nadiya Savchenko was accused of violating Russian Articles 105, 30 and 322 of the Criminal Code of the Russian Federation: murder motivated by political hatred, attempted murder, and illegal border crossing. She faces 25 years of imprisonment if found guilty. Savchenko insists that she is innocent of all charges.

As stated in the case, after the beginning of Russian aggression in Ukraine, on June 17, 2014, Nadiya Savchenko, who served in Volunteer Battalion “Aidar”, reported the coordinates for artillery fire to her comrades in the battalion. Employees of the All-Russia State Television and Radio Broadcasting Company Igor Kornelyuk and Anton Voloshin were killed as a result of this artillery fire.

The prosecution explains the inclusion of the charge of attempted murder by the fact that other civilians could have been killed as a result of this shelling. It was also alleged in the case that Savchenko illegally entered the territory of Russian Federation, where she was detained.

It is widely believed that Nadiya Savchenko was in fact captured by Luhansk People’s Republic (LPR) militants in Ukraine and was illegally transported to Russia, where the case was fabricated against her. The the hearing started in September of 2015. On December 4th, the official representative of the Investigative Committee of Russia (ICR), Vladimir Markin, admitted that Savchenko’s sentence will be harsh.