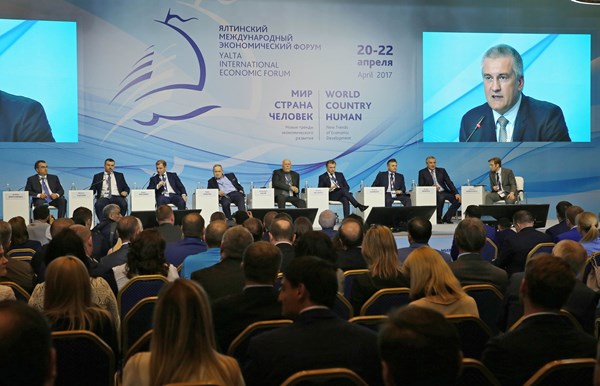 The Yalta International Economic Forum began in the Crimea on Thursday. Among its guests were deputies from Italy, Austria and Romania.

The so-called head of the Crimea, Sergey Aksyonov, wrote on Facebook that "214 businessmen, representatives of the deputy corps and executive authorities arrived to participate in the forum from 46 countries."

Among the participants he names the Senators of the Italian Parliament, Bartolomeo Amidei and Sergio Divina, the President of the Province of Reggio, Calabria Giuseppe Raffa, and representatives of regional parliaments and executive authorities of Liguria, Emilia-Romagna and Veneto.

The press service of the forum also names among its participants the deputy of Austria's National Council, the lower house of the Austrian Parliament, Johannes Hübner who represented the ultra-right "Freedom Party," and the deputy of the European Parliament from Romania, Laurenţiu Rebega who represented the extreme right-wing nationalist group "Europe of Nations and Freedoms.”

On March 19, a group of European deputies illegally entered the Crimea. Ukraine announced sanctions against them.