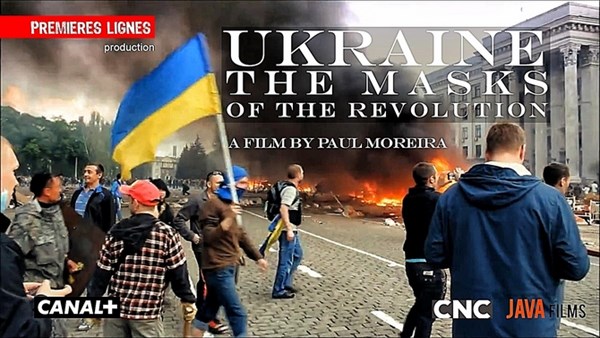 French reporters who work in Ukraine have published an open letter in which they expressed their outrage regarding the broadcast of a propagandistic movie concerning events in Ukraine by French TV Channel Canal+. “We are reporters who are regularly working in Ukraine. Some of us are constant reporters in Kiev and the surrounding regions, the others regularly visit Ukraine,” they noted at the beginning of the letter.

“On the 1st of February we were shocked by the documentary film by Paul Moreira, Ukraine: the Masks of the Revolution that was broadcasted by Canal+. We were shocked not by the arguments that were used in the film, as we have been writing and analyzing the extreme right in Ukraine for a long time,” they noted. According to the reporters, they felt uncomfortable because of the misrepresentation of the facts in the film, unverified information, and the manipulation of events and facts.

“How can anyone ignore the usage of an undated YouTube video of a march of nationalists in Kiev that was held after Maidan and was shown as one of the events of the revolution,” the reporters questioned. In addition, according to them, the film director inadequately portrayed confrontations between Russian-speaking Ukrainians and Ukrainian-speaking Ukrainians.

As it was noted in the letter, the author of the film also claims that the population of Crimea voted overwhelmingly in favor of joining Russia in a referendum held after the revolution.  They stated that the proper context was not provided for this vote, as the systematic deployment of Russian military forces during the vote was not mentioned. Also, reporters deny that the events of the 2nd of May in Odessa weren’t reported by the global media, as was portrayed in the film by Moreira.

The film by Paul Moreira that depicted the events in Ukraine during 2013-2014 was broadcast on the 1st of February by French TV Channel Canal+ at 10:30 p.m. (local time).

The film was shot in the spirit of Russian propaganda and was created to explain the extremist nationalistic battalions in Ukraine that have become a threat to the Government and also relay the events that led to the bloody massacre in Odessa. Initially, the propagandistic film became known from an article published in Le Monde, where it was also harshly criticized.