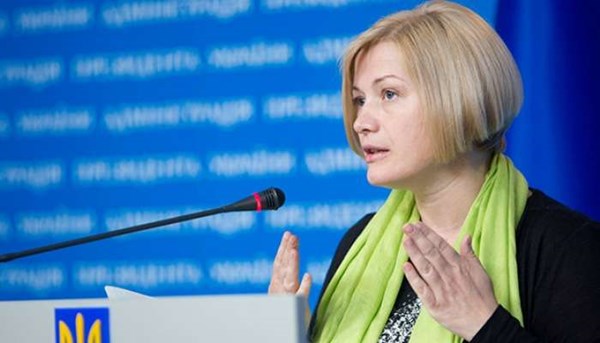 The First Deputy Chairman of the Verkhovna Rada, Iryna Herashchenko, said that sanctions against Russia should stay in force until the Minsk Agreements are fully implemented.

Separatists in the Donbas are holding 115 Ukrainian servicemen prisoner. 12 political prisoners are now in the Russian Federation prisons while 684 people are missing. Herashchenko, who is also the Presidential Envoy on the Peaceful Settlement of the Situation in Donetsk and Luhansk Regions, published the information on her Facebook page in the context of the results of the discussion of the EU-Ukraine Parliamentary Association Committee in Brussels.

"115 Ukrainians are held hostage by militants; 12 political prisoners are in Russian prisons. Consuls and doctors are rarely allowed to visit them. The International Commission of the Red Cross (ICRC) is still not allowed to search for missing persons despite promises to let them do so. The work of the international humanitarian missions on the occupied territories is blocked," Herashchenko said.

Herashchenko drew the attention of European Parliament to the deterioration of the security situation in the Donbas region, as evidenced by the separatists' daily ceasefire violations and their attacks on Ukrainian positions, both military and civilian settlements. The First Deputy Chairman also stressed that there are still Russian military and weapons on the territory of the Donbas, which is a gross violation of the Minsk Agreements.

"Ukraine is committed to the Minsk Agreements, the president, the government, the coalition are in favor of a political and diplomatic settlement of the conflict. That's why it's so important that the sanctions against the Russian Federation stay in force until the full implementation of the Minsk Agreements," Herashchenko added.

Earlier evidence of war crimes committed by the Russian Federation in the Donbas was forwarded to The Hague court.