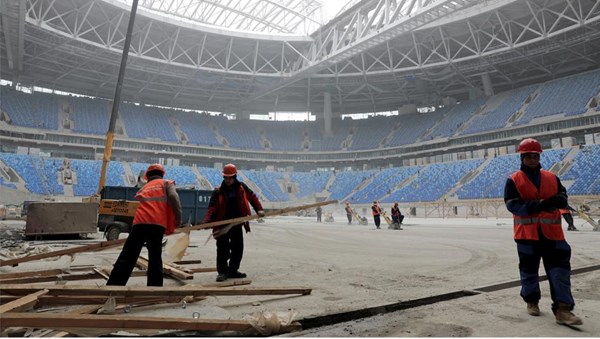 International human rights organization, Human Rights Watch, said that workers building stadiums for the World Cup and the Confederations Cup in Russia are being exploited, according to a statement issued by HRW.

As follows from the report by the human rights advocates, the salary of workers at six stadiums was paid late or not at all. In addition, they were forced to work without additional protection when the temperature was minus 25 degrees Celsius. Many worked without an employment contract.

The organization is also aware of 17 deaths at the construction site, as well as citizens of North Korea who worked on building the stadium in St. Petersburg. According to human rights advocates, they were forced to transfer their earnings to the government of the DPRK.

Human Rights Watch stated that the Russian authorities repeatedly interfered with the monitoring of the construction. The organization called on the International Football Federation and the Russian authorities to publish data on working conditions at the stadiums. Moscow denies accusations of violations of the rights of workers. The World Cup will be held in Russia in 2018, and on June 17th the country will host the Confederations Cup.

In December, the 10-year long construction of the Zenith Arena stadium in St. Petersburg was completed. During this time, its cost increased six-fold.