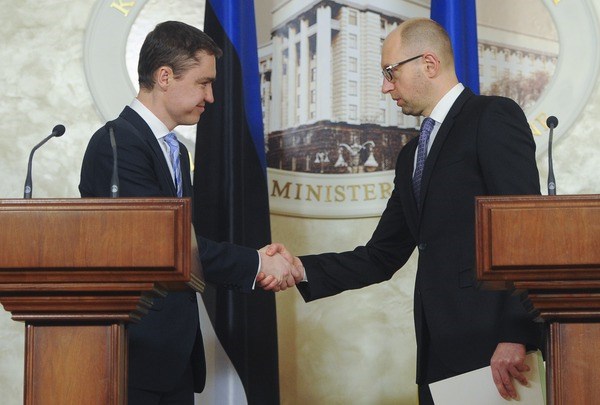 The Prime Minister of Ukraine, Arseniy Yatsenyuk, had a meeting with his Estonian colleague Taavi Rõivas. According to Glavnoye, the Ukrainian government's website states that Yatseniuk expressed his gratitude for the tangible assistance of Estonia towards Ukrainian internal reforms and for its firm position defending the territorial integrity and security of Ukraine.

Nowadays, many new international threats and challenges arise, he said, and it is important that Ukraine remains the focus of the world's attention. Yatsenyuk expressed hope that this year citizens of Ukraine will be able to travel visa-free to the EU. "Ukraine has made all the important steps required to obtain a visa-free agreement. We expect that the European Commission will decide as soon as possible," the Ukrainian Prime Minister said.

The Estonian Prime Minister has declared strong support for Ukraine's territorial integrity and its security. According to him, the issue of support and assistance to Ukraine should remain a priority for the European Union. "I'm convinced that the EU is aware of this," he stressed. Rõivas also expressed his belief that there should be no obstacles the visa-free agreement between Ukraine and the EU.

In addition, the leaders discussed the Free Trade Zone Agreement between Ukraine and the EU, which came into force on January 1st, 2016. Talking to his Estonian counterpart, Arseniy Yatsenyuk expressed his hopes that the EU would act in support of the Ukrainian economy, given the trade embargo and pressure from Russia.

The heads of the Ukrainian and Estonian governments exchanged opinions on the issues of cooperation between the two states. Particular attention was paid to cooperation in the field of e-governance and the application of advanced technologies to facilitate the provision of services to Ukrainian citizens.

They also talked about current issues of regional cooperation. The Prime Ministers of both countries expressed their similar positions on the prevention of projects that might compromise the energy security of the EU and Ukraine, in particular, the Kremlin's intentions to implement the so-called Nord Stream-2.