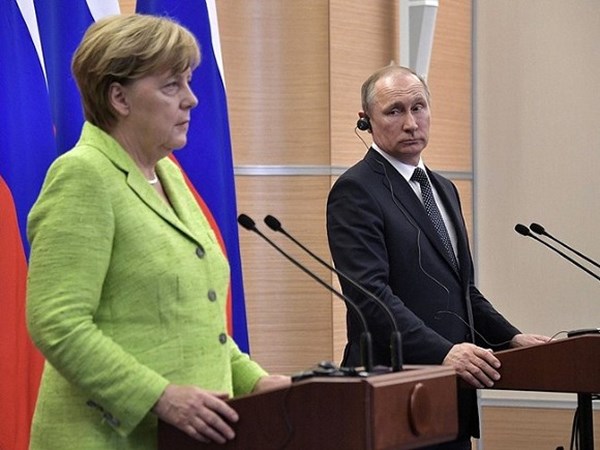 German Chancellor Angela Merkel held a meeting with Russian President Vladimir Putin on Tuesday, May 2. As planned earlier, the meeting in Sochi took place before the G20 summit on May 7-8.

During the press conference at the conclusion of the meeting, the politicians spoke about matters pertaining to bilateral relations, the fight against terrorism, as well as the situation in Syria and in Eastern Ukraine.

Angela Merkel said that there is no need to make a new agreement regarding a peaceful resolution in Ukraine.

“I do not consider the making of a new agreement advisable,” Merkel said at the press conference concluding the meeting with Putin, as reported by Interfax. The German chancellor is unhappy with the growing trends of the secession of the Eastern regions of Ukraine.

“The expropriation of enterprises, the transport blockade and other matters must be studied very thoroughly, and everything possible must be done to turn this back,” she added. “We want assurance that Ukraine will be given access to its state border – this is also part of the Minsk agreements – and then to ensure a political ruling aimed at holding local elections,” Merkel said.

“We have not yet achieved this, but still does not mean that we can forget the existing agreement and should move on to making a new one,” the German chancellor added.

She explained that the problem does not lie in concluding a new agreement regarding Ukraine, but in implementing the previous one.

“My earnest request to the Russian president is for him to do everything he can to ensure its implementation,” the politician stated.

Merkel said that she would like to lift the anti-Russian sanctions after the implementation of the Minsk agreements, pointing out the existence of contact between Russia and Germany in economics and a number of other areas.

“I would like it if we could have the opportunity to lift the sanctions, once the Minsk agreements have been implemented,” she said.

Merkel also called Russia a constructive partner in the organizing of the G20 summit in Hamburg in July.

“Developments in the world show that multilateral collaboration is for the benefit of all – it’s exactly what we need, and in this spirit we will continue to work,” the German chancellor said.

Furthermore, Merkel stated that she had asked the Russian president to intervene in the situation surrounding the rights of homosexuals in Chechnya.

“I also spoke about the very negative report about what is happening to homosexuals in Chechnya, and asked Mr. President to exert his influence to ensure that minorities’ rights are protected,” she said. According to her, this applies to Jehovah’s Witnesses too.

This was Merkel’s first visit to Russia in the last two years. The last time the Chancellor traveled to Moscow was on May 10, 2015.