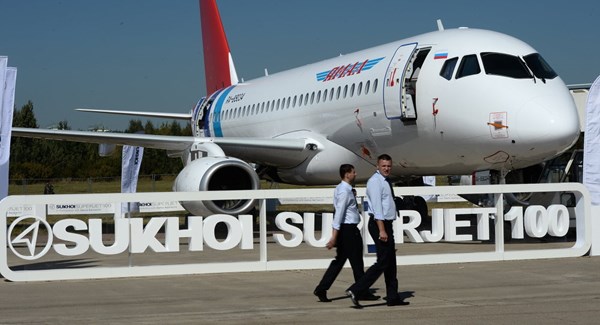 According to the minister, Iran has already held talks with Airbus and Boeing.
"A preliminary agreement with leading aircraft manufacturers have been reached," - Akhmud said, "and as soon as the nuclear deal with world powers come into force, Iran's aviation industry will come out of sanctions".

The secretary of the Association of Iranian Aviation Companies Maqsood Samani Asadi said the talks conducted during the last visit of Iranian Vice President for Science and Technology Soren Sattar to Russia, were general in nature. Civil Aviation Organization can not make a final decision on the purchase of a particular aircraft. He expressed doubt that they will want to buy Sukhoi Superjet-100.

Earlier in July Russian Transport Minister Maxim Sokolov reported about the negotiations on the sale of Sukhoi Superjet-100 to Iran.

Sukhoi Superjet-100 is the first project in the field of civil aviation, entirely created in Russia, and not the Soviet Union. Development of this short-haul passenger aircraft cost Russia around $ 7 billion. The first flight of the serial Sukhoi Superjet-100 was performed in 2010. The total of 91 aircrafts have been built as of August 1st this year, including five test planes. 66 aircrafts were delivered to customers, a third of them to foreign airlines.