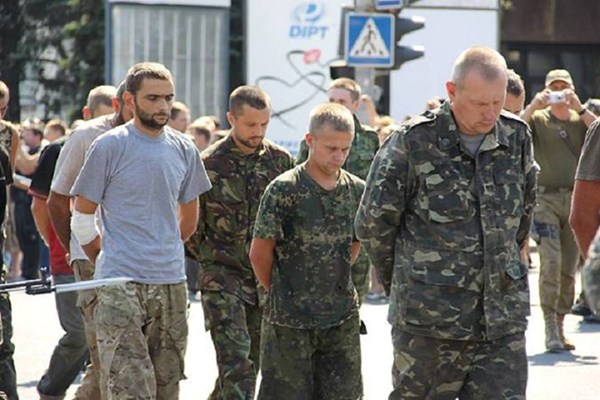 During the meeting of the humanitarian subgroup of Trilateral Contact Group in Minsk on Wednesday, March 23rd, representatives of the self-proclaimed republics of the Donbas were "debating absolutely destructively," said a spokeswoman for Ukraine, MP Iryna Herashchenko, as reported by Deutsche Welle. "They, yet again, artificially understate the number of hostages on their territories. We are painstakingly collecting information about the locations of prisoners, whom neither the mission of the Red Cross nor their families are allowed to visit, and to our requests there is often no answer," Herashchenko wrote on Facebook after the meeting in Minsk.

According to the MP, representatives of the self-proclaimed republics "were telling outright lies – they are denying the fact of the detention of several prisoners, though yesterday they were shouting about 'criminal charges' against them in accordance with their LPR and DPR Criminal Code," Herashchenko said, adding that the Ukrainian side demands a complete list of all people detained by the separatists.

Herashchenko also voiced the request of Ukrainian educators and scientists to free well-known scholar of religious studies, Ihor Kozlovsky, who was arrested by separatists in January. "Unfortunately, there is no new information for families of the hostages but we continue to insist on the release of prisoners, who have been held hostage for a long time, and we stand firmly by this," she said.

In turn, the Special Representative of the OSCE Chairperson-in-Office in Ukraine and in the Trilateral Contact Group, Martin Sajdik, said that the parties agreed to create a "road map" for the release and transfer of detained persons.

Sajdik also confirmed that the sentence of Ukrainian pilot, Nadiya Savchenko, was discussed in Minsk, but he did not give an answer on whether the possible exchange of the Ukrainian for Russian military was discussed.

Herashchenko said that the case of Savchenko is a special issue. "We once again reiterated the position of Ukraine on this - Ukraine will never recognize the verdict of this court. Nadiya should be released under the Minsk Agreements," the representative of Kiev concluded.