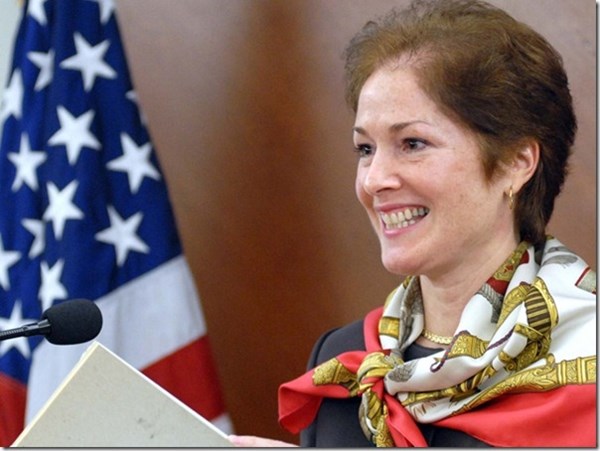 The new US Ambassador to Ukraine will be Marie Yovanovitch, who previously served as Ambassador in Armenia and Kyrgyzstan, and in the beginning of the 2000s was Deputy Chief of Mission the U.S. Embassy in Ukraine.

The “Day” newspaper reported this, citing a source in the State Department.

Since 2012, Yovanovitch has served as Principal Deputy Assistant Secretary in the Bureau of European and Eurasian Affairs.

Yovanovitch was born in Canada into a family of immigrants from Russia. As a child, she moved to the US with her family, where she graduated from Princeton University and the Pushkin Institute.

In 1986, Yovanovitch joined the Foreign Service. She worked at US diplomatic missions in Mogadishu (Somalia), London (UK), Moscow (Russia) and Ottawa (Canada).

From August 2001 to June 2004, Yovanovitch worked as a Deputy Chief of Mission at the U.S. Embassy in Kiev. In 2002, she was the first to raise the issue of Ukraine’s violation of sanctions against Iraq after uncovering Kiev’s sale of a batch of Kolchuga radar systems to Saddam Hussein’s regime.

After her post in Ukraine, Yovanovitch served as Senior Advisor to the Under Secretary of State for Political Affairs, and then in 2005 left to be Ambassador to Kyrgyzstan. In 2008, she was transferred to the post of US Ambassador to Armenia, where she remained until the summer of 2011.

Current Ambassador Geoffrey Pyatt, after three years in Ukraine, will become the new US Ambassador to Greece. He assumed his responsibilities as the US representative in Kiev in August 2013. Previous ambassadors to Ukraine also served an average of three years: John Tefft  from December 2009 to July 2013; William Taylor from June 2006 to May 2009; John Herbst from September 2003 to May 2006; and Carlos Pascual from October 2000 to May 2003.