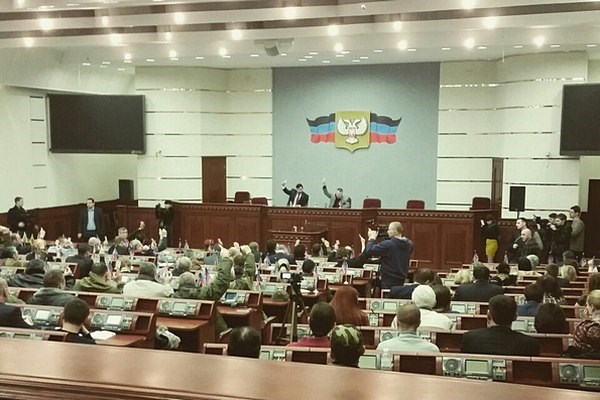 The so-called Donetsk People’s Republic (DPR) has adopted a new law on nationalization, declaring that all property belonging to Ukraine, which is located on the territory of the DPR, now belongs to the DPR.

According to the Gazeta.Ru, the law was adopted by the so-called National Council on the 24th of June.

“The law was read out in the National Council by the representative of the head of the DPR, Svetlana Yegorova. It was immediately approved in the first and second readings,” the newspaper wrote.

“The law declares that all of Ukraine’s property that is situated on the territory of the DPR will become the property of the DPR. This includes the Donetsk railway as well as all companies, banks and organizations in which Ukraine has shares. In addition, the law details and defines the procedure for the nationalization of technological complexes which have a strategic and defensive value for the DPR,” the article states.

“A list of companies can be found by studying the sanctions decree. Companies that have not been registered in the country can also be nationalized,” this was said by a source of Gazeta.Ru, who works in the DPR government, when questioned about the future process.

The decree on sanctions also lists people who were previously denied entry into the DPR. The list is headed by Donbas oligarch, Rinat Akhmetov. The list also includes 49 businesses as well as political players of Donbas who have been most influential over the past few years.

“It is now clear that this list was compiled to include owners of all technological chains of Donbas such as steel, coal, chemical engineering and food. These include the owner of the Horlivka chemical giant, Stirol Nicholay Jankowski, and the owner of the Olymp brand plant and king of vodka, Pavel Klymets,” the newspaper writes.

Gazeta.Ru reported that the day before the sanctions list was published, four names were removed: the leader of Ukrainian Communists, Petro Symonenko; the former deputy prosecutor general who served under Yanukovych, Renat Kuzmin; the “coal General”, Yefim Zviagilskiy and the former head of the of the Donbas tax administration, Alexander Papaika.