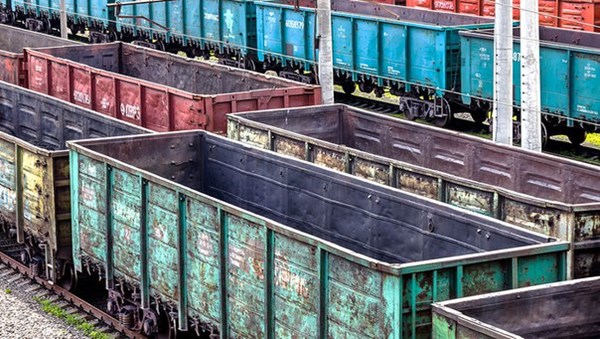 On March 23, 2017, the press service of JSC Ukrzaliznytsia published a report indicating that as of March 22, 2017, there are 29,375 freight cars, including 5,879 freight cars owned by other Ukrainian companies in the uncontrolled territories of the Donetsk and Luhansk regions. In addition, 226 diesel locomotives, 68 electric locomotives, 49 diesel cars, and 94 electric cars owned by Ukrzaliznytsia remain in the uncontrolled territories.

On March 19, 2017, in an interview with NewsOne, the Deputy Minister for the Temporarily Occupied Territories and Internally Displaced Persons of Ukraine, Heorhiy Tuka, reported that the total number of cars used for the transportation of goods (such as coal, ore, etc.) by Ukrzaliznytsia amounts to 46,500. Of these, 16,500 are located in the uncontrolled territories of Ukraine.

According to the press service of JSC Ukrzaliznytsia, overall the fleet of freight cars of the company totals approximately 104,000, including 46,767 open wagons, 3,189 mineral wagons, and 2,749 pellet rail wagons.

It should be noted that the explanatory note to the consolidated draft of JSC Ukrzaliznytsia’s 2016 financial plan, signed by the Acting General Director, Oleksandr Zavgorodniy, reported that the rolling stock consists of 109,596 freight cars, including 29,818 units assigned to the railway and 79,778 units assigned to the railway’s subsidiaries. Out of the existing fleet of freight cars (109,596 units), there are 69,800 functioning units, and 39,796 non-functioning cars. 3,475 cars can be written off and 8,257 cars need to undergo technical inspection. The level of deprecation of the freight cars amounts to 91.0%.

Based on this data, namely the number of freight cars – 109,596 units, and the number of cars to be written off – 3,475 units, the total fleet of Ukrzaliznytsia’s cars should be 106,121 units, but according to the press service of the company, as of March 2017, it only amounts to about 104,000 units. According to the information provided in the explanatory note signed by Oleksandr Zavgorodniy, the fleet of functioning cars is 69,800 units as of 2016, although the press service of Ukrzaliznytsia reports about 46,767 units as of March 2017.

On December 7, 2016, a meeting of the Committee on Transport (Chairman Dubnevych) was held, during which it was reported that "the number of railway enterprises whose property is located in the ATO (Anti-Terrorist Operation zone) were unable to conduct an inventory, assess property, and transfer it to JSC Ukrzaliznytsia in accordance with the company’s change of status to a joint stock company due to the ongoing military conflict in the area. The reorganization of the enterprises whose property is located in the ATO wasn't finalized and all rights and obligations of such enterprises weren't transferred to JSC Ukrzaliznytsia, therefore the property of the enterprises was not included in the authorized capital of JSC Ukrzaliznytsia.

On 13 July 2016, the coordinator of the Information Resistance group, MP Dmytro Tymchuk, reported that Russian curators advised the leadership of the self-proclaimed DPR (Donetsk People’s Republic)  and LPR (Luhansk People’s Republic) to pay particular attention to the restoration of the fleet of rail cars and locomotives at their disposal. In particular, it was noted that JSC Russian Railways which is engaged in the delivery of arms, ammunition and fuel from Russia to the separatist-held areas of the Donbas, will reduce the use of its rolling stock to disguise Russian assistance to separatists.

It's necessary to hold an inventory of the rolling stock of JSC Ukrzaliznytsia and transfer the stock that belongs to the state enterprise, Ukrzaliznytsia, away from the self-proclaimed Donetsk Directorates of Railway Transportation, which are controlled by the governments of the separatist republics  and conduct their activity in the uncontrolled territories, and initiate criminal proceedings against the officials of JSC Ukrzaliznytsia in accordance with Ukrainian legislation.