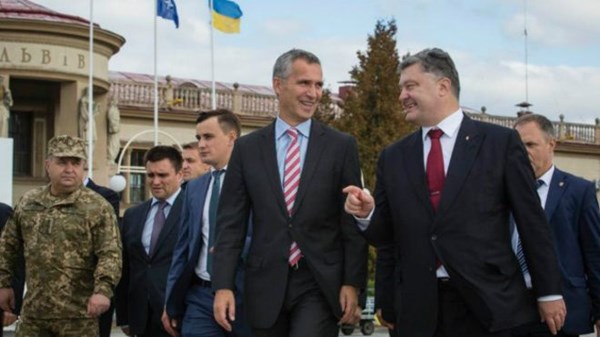 In his first visit to Ukraine NATO chief Jens Stoltenberg took part in the opening ceremony of the joint drills between Ukraine and NATO on the liquidation of consequences of emergencies at the Yavoriv training centre near Ukraine's western border.
Stoltenberg will also participate in the session of the Ukrainian National Security and Defense Council.
Ukrainian diplomats say Stoltenberg's visit, his first there, is symbolic in their quest for Western integration as Russia backs a rebellion in eastern Ukraine 18 months after it seized Crimea.
Stoltenberg will also oversee the opening of a bigger NATO liaison office in Kiev with full diplomatic status
Last year, Ukraine dropped its neutral status to open the way toward membership in the US-led military bloc, but NATO’s former Secretary-General Anders Fogh Rasmussen said Kiev needed to meet certain criteria before it could join.
Russia opposes any potential expansion of NATO to former communist areas of eastern and southeastern Europe, part of a battle for influence between Brussels and Moscow that lies at the heart of the conflict in Ukraine.