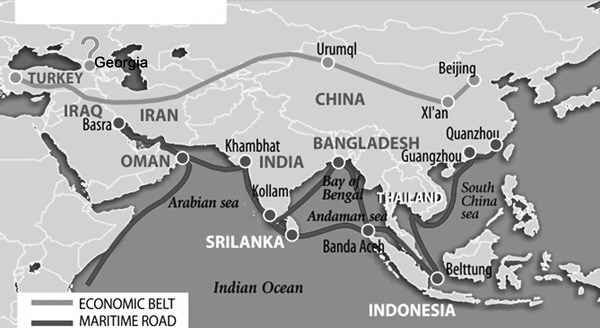 On Sunday, a train delivering the first container from China arrived in Tbilisi by the so-called New Silk Road. The Prime Minister of Georgia, Irakli Garibashvili, the Minister of Economy and the Minister of Foreign Affairs met the train at Tbilisi station. According to the Georgian leadership, the New Silk Road via Georgian territory will significantly reduce the time of freight deliveries from China to Europe, Radio Svoboda reported.

At a solemn ceremony, the Prime Minister Garibashvili announced that freight travel from the Pacific coast into Europe will take two weeks via the New Silk road instead of the normal month and a half by sea route.

“I’m sure that Georgia will soon turn into multi-regional center, connecting Europe, Eastern Asia, India, Central Asia and the Middle East,” Garibashvili stated. The Minister of Foreign Affairs of Georgia, Georgi Kvirikashvili highlighted that freight from China and South Korea would be delivered from Georgian ports not only to Turkey, but also directly to Europe through the Black Sea.

The Minister of Economy and Sustainable Development of Georgia, Dimitry Kumsishvili reported that next year Georgia would be able to thousands of containers from the People’s Republic of China.

On November 29th, containers loaded with electronics were sent from China, went through the territory of Kazakhstan, then were delivered to the Azerbaijan and from there were delivered to Tbilisi by the railroad. They will be sent from Tbilisi to the Black Sea port of Poti, then into Turkey and then into Europe. This route is called the New Silk Road.