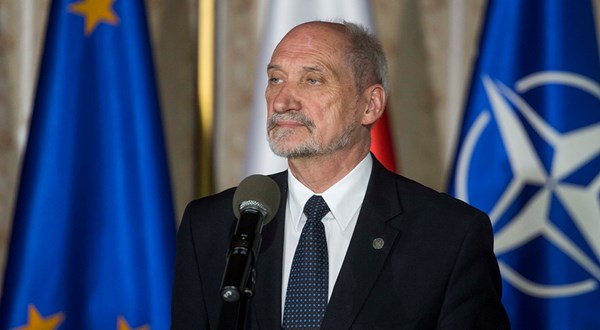 The Polish Minister of National Defense, Antoni Macierewicz, believes that European countries must be prepared not only for hybrid aggression but also for other Russian tactics.

“All European states agree that Russia’s attack against Ukraine is a precedent for breach of the peace in Europe. I don’t believe that formally everything is fine. It is about the aggression of one country against another; it is about occupation. Crimea is occupied, part of Donbas is occupied,” Macierewicz stated in his interview with the TVP TV channel.

“No European state places on the agenda this flagrant violation of the law committed by Russia. Sanctions are an expression of the fight. Their significance is sometimes diminished in Poland. However, that should never be the case because sanctions are an unequivocal expression of condemnation, an opposition to the violation of international law and order,” he noted.

The Minister also added that Poland would like Ukraine to be a member of NATO. “This initiative came from the late President of Poland, Lech Kaczyński. We were really close to opening all doors to Ukraine but all of the efforts were blocked. If it had worked then, Ukraine wouldn’t have been occupied. We should be aware of the responsibility of those political forces that didn’t want to provide a pathway for Ukraine to NATO,” Macierewicz noted.

The Minister of National Defense of Poland also stated that the response of NATO forces in case of a threat would be proportionate to the level of the enemy’s aggression.

“The problem of hybrid war was included in the response plan to the actions of such type. It should be kept in mind that generals have been preparing for the types of wars that happened in the past 200 years. We should be prepared not only for hybrid aggression but for the fact that the aggressor can apply other tactics,” the Polish Minister believes.

Macierewicz also commented on speculations that Russia can seize the Baltic States for 60 hours. “The seizure of these countries would have taken much longer. If only the Suwalki isthmus is taken, they will be able to hold the line until NATO and US forces come to help. This isthmus is our greatest force and weakness at the same time.”

The representatives of the Russian Federation stated repeatedly that Russia isn’t a participant in the Ukrainian conflict that has raged since April 2014. The authorities of Ukraine insist that Crimea is a part of Ukrainian territory. The Western countries also refuse to recognize the accession of Crimea to Russia.