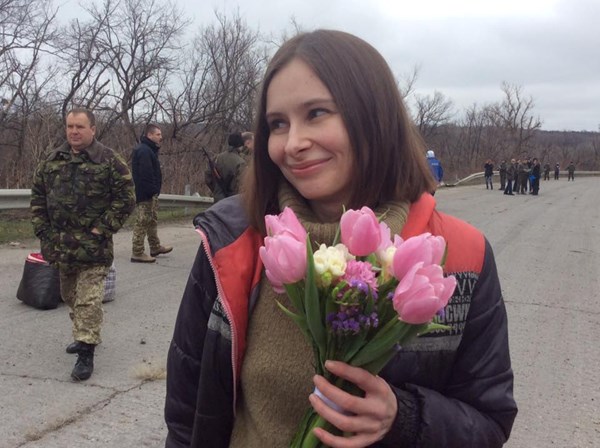 The President of Ukraine, Petro Poroshenko, has pardoned a Russian citizen in order to ensure the release of Ukrainian journalist, Maria Varfolomeyeva.  This was announced on Facebook by the Press Secretary of the Head of State, Svyatoslav Tsegolko.

“The militants continuously delayed or refused to make the exchange.  With the aim of facilitating the release of Varfolomeyeva, the President pardoned a Russian citizen who was transferred to the occupied territory today,” Tsegolko said.

Irina Herashchenko is the Ukrainian representative in the Trilateral Contact Group on the peaceful settlement of the situation in the Donbas region.  She is also a member of the Bloc Petro Poroshenko.  Herashchenko participated in the release of Varfolomeyeva, and reported that the journalist had been held captive for 14 months.

“She was detained on charges of spying for Ukraine, for active participation in Euromaidan and for sharing pictures of patriotic symbolism on social networking sites.  Since the 9th of January this year, her family, her friends, the SSU, the journalistic community and volunteers all fought for her release,” Herashchenko posted on her Facebook page.

According to her, during meetings held in Minsk, the issue of Varfolomeyeva’s release was repeatedly raised.  However, separatists had refused to include her on the list of prisoners to be exchanged.  “They then put forward conditions for the release of another ‘lost freedom fighter’ of the Russian Spring,” Herashchenko added.

She said that the release was made possible because Poroshenko personally supervised the case.  “He has pardoned a Russian citizen, Gorbunov, in order to ensure the release of Varfolomeyeva.  Gorbunov was convicted and sentenced to a lengthy term for crimes committed against the territorial integrity of the state.  He is just another example of the presence of Russian mercenaries in our land,” Herashchenko concluded.

According to her, Poroshenko offered Varfolomeyeva rehabilitation and treatment upon her release at a medical center exclusively for Ukrainian officials.

Varfolomeyeva was released on the 3rd of March.

The was in the Donbas has been ongoing since the spring of 2014.  Russia has repeatedly denied its involvement in the conflict.