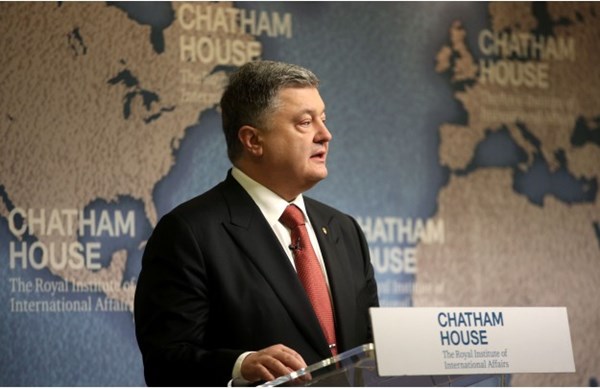 Ukrainian President Petro Poroshenko commented on a recent phone call in the “Normandy Format”. According to him, while talking to Russian President Vladimir Putin, he was once again convinced that the Kremlin does not need peace, but control.

He mentioned this during a speech at the Royal Institute of International Affairs (Chatham House) in London.

“The Russians are not interested in achieving peace. They are interested in gaining control. I felt it again on Monday, when, together with Chancellor Merkel and President Hollande, we held telephone talks with President Putin. It was yet another demonstration of Moscow’s empty promises. It was another demonstration of their attitude: if you want peace, you can have it: but only on our terms. No compromises. Only the right of might,” President Poroshenko said.

During his speech he mentioned a well-known saying of Winston Churchill: “An appeaser is one who feeds a crocodile, hoping it will eat him last”.

“There is a place where these true words are just as apparent as during that time in the United Kingdom. This place is Ukraine. And there is a crocodile, who several, if not many, would willingly feed today in order to secure their tomorrow. Many believe that as soon as Russia is fed, it will stop being a threat. I beg to differ. Russia does not have a problem with hunger, it has a worldview problem. It does not believe in things like democracy and human rights. It believes in things like ‘world domination’ and ‘spheres of influence’. It doesn’t play by the rules. It believes in only one rule: ‘Russia will win. Always. In spite of everything’,” he said.

This is why Poroshenko believes that the West needs to maintain its pressure on Russia, including pressure in the form of sanctions.

“It’s important for us to keep the sanctions against Russia. Don’t believe those who claim the sanctions have contributed nothing. First and foremost – fewer killed Ukrainians is far from nothing. Secondly, if not for the sanctions and the newborn Ukrainian army, Russian tanks would be standing significantly deeper in Europe. Putin started his ‘campaign’ in Ukraine with a sense of impunity. Thanks to the sanctions, and Ukraine’s willingness to defend itself, he has started to hesitate. And he needs to arrive at a feeling of inevitability. The inevitability of the joint response of the West,” the Ukrainian president emphasized.