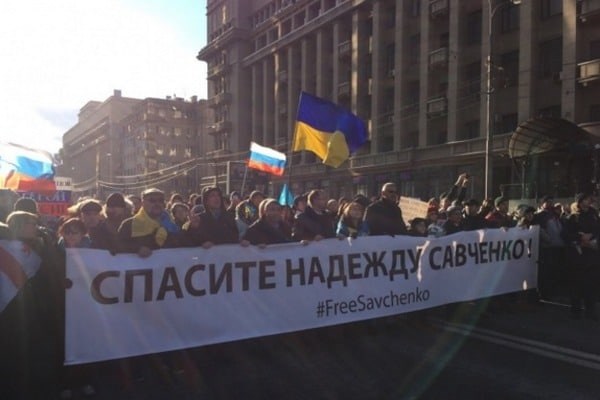 Ukrainian President Petro Poroshenko expressed his gratitude to the Russians who, during the events held in memory of slain Russian opposition leader Boris Nemtsov in Moscow, also expressed support for Nadiya Savchenko, the former Ukrainian pilot who is standing trial in Russia for the deaths of two Russian journalists in eastern Ukraine.

“Thank you to all those concerned in Moscow who showed solidarity with our Nadiya Savchenko. This is a manifestation of dignity. Just 2 years ago, we Ukrainians went to our own protests. We also remember Boris Nemtsov. Open, courageous, determined. With a brilliant sense of humor and a sincere love for Ukraine,” Poroshenko wrote on Facebook.

Opposition leader Boris Nemtsov was shot and killed on February 27th, 2015 in the center of Moscow. Thousands of Nemtsov’s supporters marched through the streets of the Russian capital on the one year anniversary of his assassination.  Events were also held in St. Petersburg, Kazan, Samara, Perm, Chelyabinsk, Yaroslavl, Krasnodar, Yekaterinburg and a number of other cities.