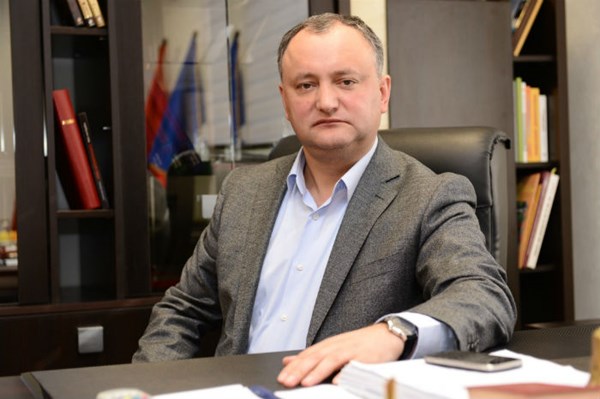 Moldovan President Igor Dodon promised during a meeting with Russian Deputy Prime Minister Dmitry Rogozin to support a strategic dialogue between the two countries. At the same time, Dodon appealed to Moscow with a request to refrain from sanctions after Rogozin was declared persona non grata in Moldova.

The meeting between Dodon and Rogozin took place in Tehran. Initially, it was planned to be held in Chisinau on July 28, but Romania did not permit the plane carrying the Russian official through its airspace, and on August 2 Moldovan authorities declared Rogozin persona non grata.

Dodon called the meeting with Rogozin "good" and "constructive." "We discussed the events of recent weeks in detail, clarified the current state of affairs between our countries and determined priority areas for the coming months," the Moldovan president said.

He also called the Moldovan Foreign Ministry's decision to recognize Rogozin as persona non grata "an undermining of the efforts of the Presidents of Moldova and Russia to return to strategic dialogue and partnership." Dodon said that these actions by the Moldovan authorities are not supported by most of the country's population.

Consequently, the President of Moldova appealed to Russia with a request to refrain from retaliatory measures. "In light of this, I have asked our Russian partners to refrain from measures and sanctions that would impact and strike at the interests of ordinary citizens and economic agents. Those who would suffer from potential trade and migration sanctions would not be ministers and deputies of the ruling group, but rather ordinary Moldovans, who are not guilty of anything," Dodon explained.

In response, Dodon promised to take all possible measures on his part to normalize dialogue. Amongst other things, the Head of State said that he intends to block bills that could damage relations between the two countries.

"As the President of Moldova and on the basis of the legitimate mandate entrusted to me by the people of our country, I will defend the interests of the Moldovan people, and intend to block with all possible legal means, up to the boycott, draft laws passed by Parliament that are attempts by the ruling Democratic Party to sabotage and destroy our bilateral Relations with the Russian Federation," wrote Dodon.

The head of the Moldovan Foreign Ministry, Andrei Galbur, explained that the assignment of persona non grata status to Dmitry Rogozin was due to "insulting remarks" by Rogozin towards Moldova. The Kremlin called the decision of the Moldovan government "absolutely unacceptable". The Russian Foreign Ministry, in turn, promised to give an "appropriate response" to the actions of Chisinau.