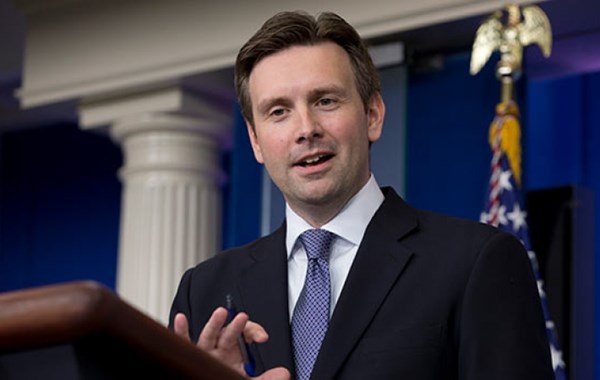 The economic sanctions that the West imposed against Russia over its actions in eastern Ukraine have led Russian President Vladimir Putin to seek a unified resolution to the situation in Syria, White House Press Secretary Josh Earnest stated.

Speaking during his annual end-of-the-year news conference, Putin said he was convinced that Washington was prepared to "move toward settling the issues that can only be settled through joint efforts." The Russian President went on to assert that the Kremlin too has worked to narrow its differences with the US on Syria.

Putin stated that Russia’s goal in Syria "coincides with the U.S.’s vision in its key aspects: joint work on a constitution, creation of instruments of control over future early elections, holding the vote and recognizing its results on the basis of that political process."

The White House Press Secretary, however, suggested that there was more to Putin’s words than seeking peace in the war-torn country.

“Having the same approach to Syria… that is certainly not the way that this administration sees it.  But I’ll just say that I’m not surprised to hear that he [Putin] might have a different explanation, primarily because of how isolated Russia is right now,” Earnest said.

“Because of their destabilizing actions in Ukraine, Russia is subject to a series of economic sanctions that have been imposed on their economy by the United States and our European allies that has had a negative impact on the Russian economy, and it has isolated Russia in ways that I recognize they’re quite uncomfortable with….. Putin would be trying to suggest to the international community that he is in line with the policy of the United States when it comes to Syria.  They’re not,” the White House representative continued.

While the Russian Air Force has been involved in the fight against the so-called Islamic State, Moscow has been criticized for its widespread support of Syrian President Bashar al-Assad, and has been accused of carrying out air strikes against US-backed opposition groups in its support of the Syrian dictator.

Earnest stated that Russia’s focus on assisting the Syrian government is “not consistent with the policy or view or priority of the United States of America, or any of the 65 nations that are part of our coalition.”

Meanwhile, on Friday, the UN Security Council unanimously voted 15-0 in favor of calling for a cease-fire and political talks to help end the war in Syria. The vote marks the first time that the US and Russia have agreed on a plan for a political solution to the conflict. Whether this is a genuine call for peace or a ploy to end Russia’s economic isolation remains to be seen.