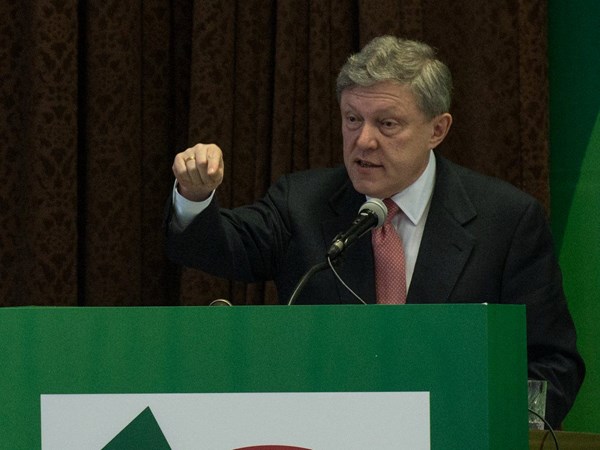 In an op-ed written for Novaya Gazeta, politician Grigory Yavlinsky examined the year's main events in Russia, highlighting political reprisals against political dissidents, in particular the assassination of Boris Nemtsov.

"The whole theme of this year, the most pressure put on civil society in the last 30 years, the amount of force used in the country and in international relations, is concentrated in the very beginning: the tragedy of February 27th," Yavlinsky wrote, referring to the day on which Nemtsov was murdered.

"Boris Nemtsov is a victim of the war. Russia is involved in a war that has become institutionalized. It seems that this war has shifted from Ukraine to Syria, and its center is here in Moscow, in the thinking and behavior of the government, in propaganda, in the poisoned and decomposing national identity. The population feels insecure due to both external and internal threats, and there is no protection offered by the state" the politician continued.

Yavlinsky pointed towards the fact that in Russia, there continues to be a widely held belief that Nemtsov's murder was not related to his public and social activities. The politician suggests that this symbolizes the entire failure of post-Soviet modernization.

"The iconic political assassination of a prominent politician, the war in Ukraine and in Syria, are all features of the post-Soviet period which began in 1991... and indicate the final breakdown of the entire post-Soviet time. It is not easy for Russia to create a modern democratic state and an efficient market economy," Yavlinsky wrote.

The politician stressed that there is only one possible solution, and that is to create a full-fledged political alternative. "As long as there is no alternative to Putin in the country, there is no hope. In the absence of an alternative, the collapse of the regime due to its own mistakes will lead to chaos and possibly even more severe consequences," Yavlinsky stressed.

Yavlinsky is best known as the author of the "500 Days Program", a plan for transitioning the Soviet Union to a free-market economy. He is also a leader of the liberal Yabloko party, and is a staunch critic of Vladimir Putin's United Russia party.