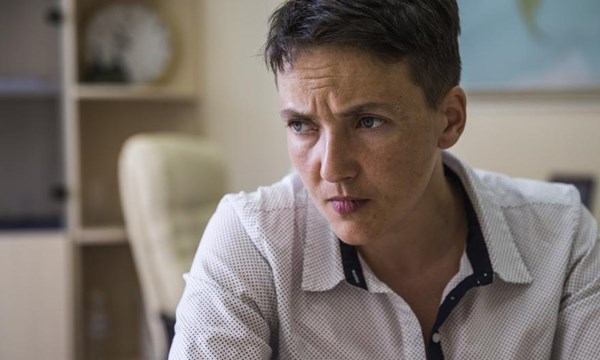 Nadiya Savchenko, an MP in the Ukrainian Verkhovna Rada, went to the self-proclaimed Donetsk People's Republic (DPR) and visited Ukrainian prisoners there. She posted a list the names of 34 prisoners contained in 12 cells on her Facebook page on Saturday, February 25. "It was possible to see our prisoners. The guys are doing well. The general conditions are like a prison. The attitude towards them, they say, is normal. They believe that they will soon be free, and do not lose hope...." Savchenko wrote.

Information that Nadiya Savchenko and Vladimir Ruban, who is head of the ‘Officers Corps’ (a Ukrainian center for the liberation of prisoners), arrived in Donetsk appeared on Friday, February 24. On Friday Tatiana Ryzhkova, an MP from the ‘Petro Poroshenko Bloc’ faction, reported that during her visit Savchenko incited Ukrainian troops to overthrow the government in Ukraine, and urged the General Prosecutor's Office and the SBU to investigate Savchenko’s actions.

The head of the Security Service of Ukraine (SBU), Alexander Tkachuk, said that the SBU would hold a conversation with Nadiya Savchenko regarding her visit to Donetsk and possible illegal actions. "We specifically do not monitor People's Deputies, but, having been informed by MP Ryzhkova, we will be sure to check this information," said Tkachuk.

At the same time, the DPR said they wanted to exchange prisoners according to the "all for all" formula; however, this would require the release of 475 people.

Russian RIA Novosti reported on this with reference to Human Rights Ombudsman of the DPR, Dariya Morozova.

According to Morozova, on Friday, MP Nadiya Savchenko visited the colony in Makiivka, where the prisoners from the Ukrainian security forces were kept, and "appealed to the leaders of the countries of the Normandy Format with a plea to promote the exchange of prisoners in the Donbas according to the ‘all for all’ formula”.

"The proposals, which Nadiya voiced through the Internet and the media, are not acceptable in these terms," said Morozova.

She stated that Ukraine "is ready to transfer 250 prisoners [to the DNR], while the list confirmed by Kiev includes 475".

"That is why we insist on the full implementation of point from the ‘Minsk agreements ‘- an ‘all for all’ exchange, the sooner the better," said Morozova.

Morozova also said that the colony where Savchenko visited holds 34 people, while the total number of prisoners is 41.

"The rest are the charged on other items, and are either in prison or in other colonies," added Morozova.