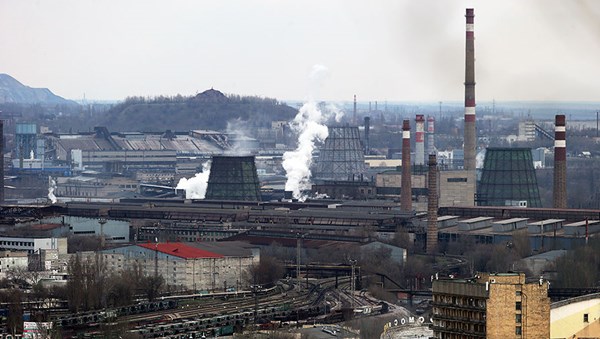 On March 1, separatists introduced "external management" to Ukrainian enterprises located in the territories of Donetsk and Luhansk regions not controlled by Kyiv. This action is the fulfilment of an ultimatum given the day before to the organizers of the trade blockade of the Donbas. The blockade is has been manned by veterans of the war in eastern Ukraine since the end of January.

The separatists placed about 40 Ukrainian companies under "external management." This was stated by the head of the so-called Donetsk People's Republic, Alexander Zakharchenko. He also added that none of the owners of Ukrainian enterprises have attempted to contact him.

Experts note that after the "nationalization" of Ukrainian enterprises and mines by the separatists it will be impossible for them to resume work. The separatists would not be able to sell coal to other countries anyway.

"Who would be paid for the goods if someone should suddenly want to buy them? They [the separatists] have no relevant legal entity. They have no central bank because they are not a state. Neither Belarus nor Kazakhstan nor the Russian Federation intend to recognize them. Furthermore, there is the issue of transportation. We, Ukraine transport such goods by sea through Mariupol. Will these ports be transporting coal from the enterprises nationalized by the separatists? They would send them to the bottom [of the sea] instead," the head of the sociological center Active Group, Andriy Yeremenko assured.

Volunteer Olha Reshetilova wrote on Facebook that the separatists blocked the supply of coal to the Luhansk thermal power plant in town of Shchastya. They are expected to demand that Ukraine stop the blockade held by the activists in Hirske. According to the volunteers, if work in the Luhansk thermal plant is disrupted, both Ukrainian- and separatist-held territories will be left without electricity.

Experts believe that the biggest losses resulting from the blockade and "nationalization" will be sustained by Ukrainian business tycoon Rinat Akhmetov. Akhmetov himself has remained silent about the situation but his top managers have already expressed their position.

"The company has worked, is working and will continue to work exclusively within the framework of the Ukrainian legislation," the General Director of Donbas Fuel-Energy Company, Maxim Timchenko said.

In addition to manufacturing enterprises, separatists took control of the facilities of Ukrtelecom, a telecommunications operator. The company's report says that it is forced to stop providing services to the residents of the uncontrolled part of the Donetsk region "due to interference of unidentified persons in the network and the capture of the office by armed men." Almost two hundred thousand people in Donbas have lost basic phone service and access to the Internet.

Russia does not consider the actions of the separatists unlawful, according to the press secretary of the Russian president, Dmitry Peskov.

"I do not think the word ‘robbery’ is applicable here... We are witnessing the fact that regions alienated by its government have slid into an even more difficult situation, finding themselves completely blockaded by the extremist groups. That's why, of course, to some extent the actions that have been taken by the leadership in these regions are understandable," Peskov said.

He also noted that he has no information on the possible opening of the Russian market to these companies.

President of Ukraine Petro Poroshenko immediately reacted to the so-called "nationalization.” During a meeting with UK Secretary of State for Foreign and Commonwealth Affairs Boris Johnson and Minister of Foreign Affairs of Poland Witold Waszczykowski, he urged the introduction of additional sanctions in connection with the "nationalization" of Ukrainian enterprises in the Donbas.

"Sanctions were applied jointly to those who now become the owners of the confiscated assets for violations of international and Ukrainian legislation," Poroshenko said, expressing the belief that the coordinated actions will be more effective.

The new owner of the “nationalized” companies was discovered when, on March 1, the Security Service of Ukraine or the SBU intercepted another conversation between Zakharchenko and a Russian citizen.

"The conversation shows Russian curators plan to transfer ownership of the majority of the most attractive Ukrainian economic assets on the temporarily occupied territory of the Donetsk region to Sergei Kurchenko, an oligarch who fled to Russia. Obviously, taxes on the "nationalized" enterprises as a result of the blockade will not be paid into the Ukrainian budget and all the income will end up in the "pockets" of former Ukrainian President Yanukovych," an SBU report says.

In the conversation intercepted by the SBU, Zakharchenko expressed dissatisfaction with the fact that "Kurchenko took all the best." The other man promised to influence the resolution of the issue favorably for Zakharchenko.

One of the organizers of the trade blockade of the Donbas, MP Semen Semenchenko also commented on the "nationalization.” He called it "ridiculous,” arguing that the separatist republics are not states, which is why their "property" will not be recognized by anyone.