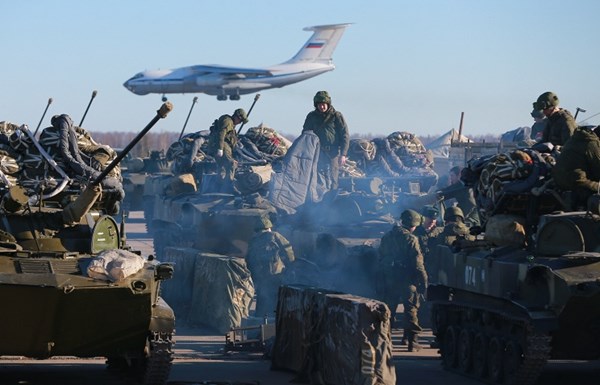 The Russian Minister of Defense, Sergey Shoygu, stated that three new divisions of the Armed Forces of the Russian Federation will be deployed along the Western border in 2016.

“I can’t but mention such a critical task, which is the formation of three divisions in Western direction. The task is extremely important,” Shoygu said. The Minister of Defense stressed that alongside the creation of the new divisions, there is a need to set up proper infrastructure including barracks, firing ranges and military hardware depots.

The Head of the Defense Ministry ordered the completion of the construction of ammunition depots for weapons and ammunition this year. He had drawn attention to the fact that the Ministry of Defense has to accomplish tasks set out by the Supreme Commander-in-Chief of the Armed Forces of the Russian Federation.

Last autumn, Shoygu noted that military facilities for 30 units of troops have been under construction in the Western Military District since the beginning of 2015. At the end of November, the Minister of Defense reported that 15 units and military facilities were created and the formation of two more units was in the final stages.

As previously reported, the new 1st tank army was created in the Western Military District. The headquarters of this tank brigade was located in the Moscow region. According to TASS, the 20th General Army was formed anew in connection with the transfer of most its forces into the 1st Tank Army.

The Russian Ministry of Defense intends to complete establishment of military facilities in the island region of the Arctic and formation of infrastructure in the Kuril Islands.

“Generally, we have to complete everything related to the island region. Our secondary objective is to complete construction of our bases in Arctic”, said Shoygu. “This year we have to fully complete formation of the whole structure in the Kuril Islands,” the Minister of Defense added.

During the conference call, the Minister also stressed that the practice of dawn raids, involving regional and federal authorities, will be continued. Such maneuvers will cover all military districts and all kinds of troops, he noted. “During dawn raids, careful attention should be given to the movement of troops over long distances, the creation of standing forces in threatened areas, and working out proper air defense using the air force,” Shoygu clarified.

The Strategic Missile Troops of the Russian Federation (SMTRF)

According to him, this requires the systematic improvement of infrastructure to ensure strategic nuclear forces. It primarily concerns the locations of strategic missile-carrying submarines and airfields of the Long-Range Aviation of the Air Force.

Strategic command and staff exercise “Caucasus 2016” will showcase the Russian Army’s ability to protect national interests in the Southwestern region.

“During the exercise, it is very important to assess our capabilities on protection of national interests in the Southwest against the background of difficult international military-political situation,” the Defense Minister said.

According to Shoygu, troops and forces have to work out issues related to combat interactions and effective actions in mountainous areas, taking into consideration the increase in terrorist threats in the region. The Minister also noted that development of military cooperation with Russian allies and partners, mostly within the Collective Security Treaty Organization, needs to be continued in 2016.