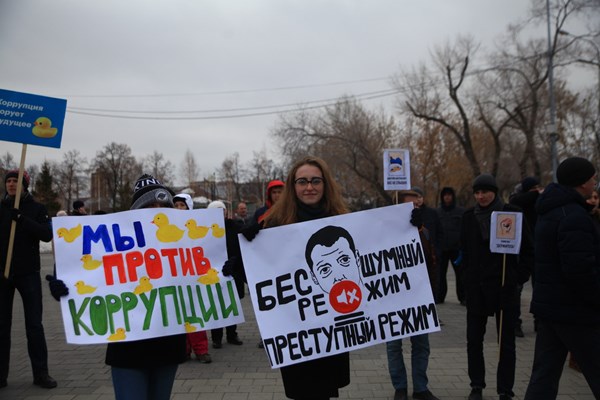 St. Petersburg authorities rejected all four applications for holding an anti-corruption rally on June 12, which were filed by supporters of the founder of the Anti-Corruption Foundation (FBK), Alexey Navalny. On Monday, June 5, Interfax reported this with reference to the head of the St. Petersburg Navalny campaign headquarters, Polina Kostyleva.

"We filed four different applications, including for holding the rally on Marsovo Polye and the square near the Bryantsev Youth Theatre. The number of participants was estimated to be up to fifteen thousand. The Committee in charge of legality issued us four refusals, in which it requests to reduce the number of participants to 3 thousand people and relocate the rally to the Udelnyy Park," Kostyleva said. According to her, the place proposed by the authorities is absolutely not suited for holding a rally or conveying to the authorities the opinion of its participants.

Organizers of the rally against corruption also refused to reduce the number of its participants and applied for three new sites for holding the rally. They are ready to hold the rally in Alexander Park near the Gorkovskaya metro station, near the monument to Lenin on Moscow Square and on the Marsovo Polye. Because another event is scheduled to be held on Marsovo Polye on June 12 from 11 o'clock, the organizing committee asked Smolny to let them hold the rally from 9:00 PM to 11:00 PM, Polina Kostyleva specified.

June 12 rallies against corruption, organized by supporters of Alexey Navalny, are planned to be held in all major cities of Russia. In some cities, particularly in Kirov and Irkutsk, local authorities allowed the event. In Moscow, Aleksey Navalny's application for a march along Tverskaya Street and a rally in Okhotny Ryad was rejected. Instead, the authorities suggested moving the event to Academician Sakharov Prospekt or Lyublino. Alexey Navalny called this proposal rudeness and notified the mayor's office about his disagreement.