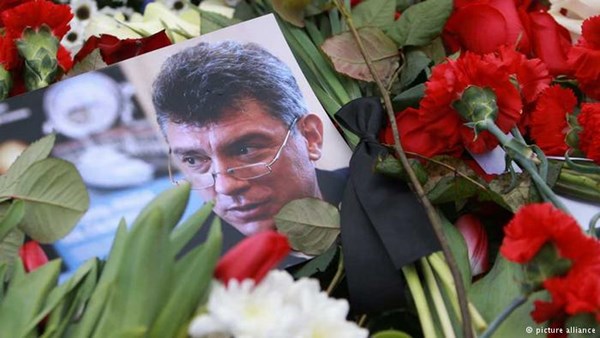 The memorial site of slain Russian opposition leader, Boris Nemtsov, has been dismantled for the third time this month.  The latest incident occurred in the early hours of the 30th of January at the site’s location on the Bolshoy Moskvoretsky Bridge in the center of Moscow.  At approximately 3 a.m., police officers detained two activists who were standing in front of the memorial.  They were then taken to the police station.

Later, the activists were released without completing a detention record.  Upon return to the memorial site, they found that all flowers, candles and posters had been removed.  The Deputy Chairman of the People’s Freedom Party, Ilya Yashin, told Interfax on the 30th of January that employees of the state firm Gormost had destroyed the memorial.

“The same situation occurred on the 14th and the 20th of January.  Representatives of the People’s Freedom Party, members of the Solidarity movement and Duma Deputy, Dmitry Gudkov, met several times with representatives of Gormost.  Each meeting ended with an achievement of compromise, an appointment of the responsible person as well as promises to monitor the situation.  However, things haven’t changed,” Yashin said.

Boris Nemtsov was an opposition politician and the former First Deputy Prime Minister of Russia.  He was shot on the 27th of February 2015.